Kris Sproles, video content producer at Wright State University, was named the 2019 Television Photographer of the Year by the Ohio News Photographers Association.

Sproles, a staff member in the Office of Communications, also received six individual awards from the association for stories he produced for the Wright State Newsroom.

“Kris’s work shines a bright light on the success of Wright State University and its people with each Newsroom video he produces. Many at Wright State appreciate his videos and how they tell Wright State’s story,” said Seth Bauguess, director of communications. 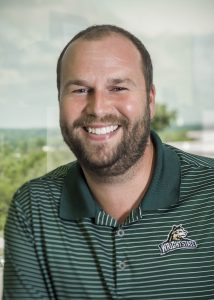 Kris Sproles, video content producer in the Office of Communications

Sproles won a first-place award in the general news category for “Fresh Food,” which featured a distribution event by The Foodbank at the Wright State University Nutter Center.

He also received a first-place award for in-depth news for “Smashing Pumpkins,” which highlighted community service efforts by the Wright State chapter of the Phi Mu Alpha Sinfonia Fraternity.

This is the second time Sproles was named the association’s Television Photographer of the Year. He was previously honored in 2016 for his work at WDTN-TV in Dayton.

Since he joined the Office of Communications, Sproles has regularly received awards in Ohio’s Best Journalism Contest, an annual competition sponsored by the Ohio chapter of the Society of Professional Journalists.