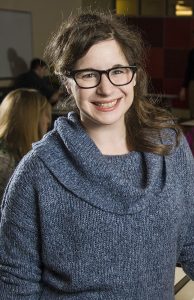 Crystal B. Lake was named the 2018–19 Brage Golding Distinguished Professor of Research. Lake joined the Wright State faculty in 2011 as an assistant professor in the Department of English Language and Literatures, and she was promoted to the rank of full professor in 2019.

The President’s Award for Excellence in Research recognizes Lake for her work on several recent projects. One of those is her book, “Artifacts: How We Think and Write About Found Objects,” which has recently been published by Johns Hopkins University Press. For researchers, Lake’s book offers new insights into how the artifacts that people first started digging up in 17th-century England changed the ways we study the past. For general readers, “Artifacts” uncovers the curious histories of rusty coins, moldy manuscripts, obsolete weapons and grave goods.

Additionally, Lake has been working for several years with an international team of researchers and software developers on a digital humanities project revolving around a series of more than 300 fine art prints depicting antiquities that were first published in the 1700s. Very few copies of these large and detailed prints survive today, and many of the antiquities they depict have also been lost. In 2017, Lake and Noah Heringman from the University of Missouri received a grant from the National Endowment for the Humanities to support their work in building an innovative, online archive of these important historical images at vetustamonumenta.org.

The Award for Excellence also recognizes Lake for The Rambling, an online magazine that she launched in 2018 with Sarah Tindal Kareem from UCLA in order to publish informed writing for a general audience. So far, the magazine has published more than 50 authors and reached more than 60,000 readers.

Currently, Lake is completing a book about literary crafts. On campus, Lake is the faculty advisor for Wright State’s chapter of the English Honor Society, Sigma Tau Delta, and she is looking forward to teaching a new course next semester on the history and psychology of reading.