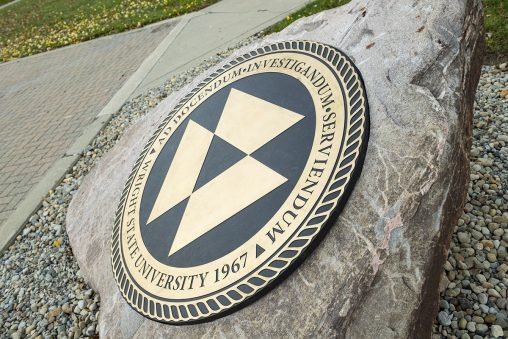 Wright State students worked together to get the Wright State seal installed near Hamilton Hall plaza on the Dayton Campus.

Students, faculty and staff making their way around the Dayton Campus this fall have probably noticed a new addition to the landscape. Thanks to the efforts of the ’67 Society student organization, the official seal of Wright State University is proudly showcased in a large granite rock near Hamilton Hall plaza.

“It’s a great spot for it,” said Aaron Brautigam, a senior human resource management major and member of the ’67 Society, which focuses on promoting student philanthropy, engaging with alumni, and building university pride and tradition.

Brautigam said the location was selected for its high visibility. Campus tour groups walk right past it, students see it as they go to and from classes, and many campus events are held in the area near the seal.

Displaying the university seal on the Dayton Campus was the brainchild of Brautigam and former Wright State students and ’67 Society members Holley Mapel ’19 and Markayla Clayton ’20. The trio came up with the idea when Clayton was touring other universities that she was considering for graduate school. With Brautigam frequently accompanying Clayton on those visits, the two noticed that most campuses had their university seal prominently featured.

The ’67 Society members weren’t sure if Wright State even had a university seal. As they began their research, they discovered that the university does have an official seal, but most students see it for the first time on their diplomas when they graduate. By creating a home for the seal on campus, students would become familiar with it early on and begin to feel a sense of pride for the seal and the principles on which the university was founded.

Mapel, who was serving as a student trustee on the Wright State University Foundation Board of Trustees, thought the project would be a good candidate for a Students First Fund grant from the foundation. Mapel, Brautigam and Clayton began putting in many hours meeting with staff in the Office of Marketing and the university’s Facilities team to discuss the logistics of the project and get quotes on its estimated cost.

“It was clear when we received the Students First Fund application and decided to provide the funds for the project that the ’67 Society had put forth great time and effort into their proposal,” said Dave Deptula, chair of the Students First Fund grants committee. “Our committee agreed with the ’67 Society that the university seal would be a welcome addition to campus and further enhance student life and engagement while celebrating Wright State’s rich history and tradition.” 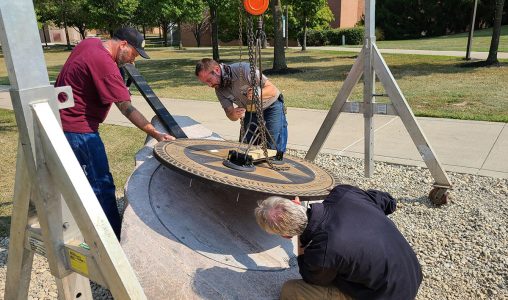 Members of the Facilities team installed the 300-pound Wright State seal in September.

Installed in September, the 300-pound seal measures 48 inches in diameter. Inscribed on the seal are the words “ad docendum,” “investigandum” and “serviendum” — the Latin words for teaching, investigating and service. The three words pay tribute to Wright State’s founding principles of teaching, research and service.

Kathy Warden, manager of the customer care center and small projects, said the installation of the seal and rock involved several groups from the Facilities team including maintenance, the Sign Shop and Grounds Department.

“We anticipate this bronze plaque will become a destination on campus for students and visitors alike,” said Warden.

While the ’67 Society had originally hoped to celebrate the installation with a campus event, the COVID-19 pandemic thwarted those plans. Even Brautigam, who has been taking all of his classes online this semester, has not seen the completed installation. Fortunately, his friends on campus have sent photos his way and he’s noticed many selfies popping up on social media.

“It’s been really cool to see how well it has been received,” said Brautigam. “It’s a nice feeling knowing that I helped facilitate that change. It helps make Wright State’s campus unique and makes us proud of what we do.”

With the university’s seal now prominently featured on campus, students will become familiar with it long before graduation day. When they look at their diplomas as alumni in the years to come, Brautigam hopes the seal will serve as a fond reminder of their days at Wright State.

“They can think back to the positive times they had on campus and the great things that Wright State was able to offer them,” said Brautigam. “It provides a deeper level of meaning to your experience at Wright State. You’re tying back all of the positive memories you made on campus when you see that image.”