The following are impressions of students from Bangladesh, Nigeria and India. 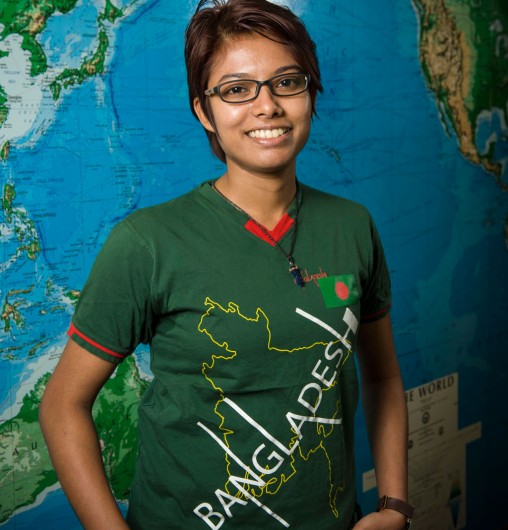 If you like nature and living a quieter life, Bangladesh is the place for you.

“For me, when it’s dark, your sixth sense feels better than what your eyes see,” said Arony Muhit, describing the clarity of the stars at night. “It gets imaginative.”

The Rikhshaw, a three-wheeled hooded bicycle with seating for passengers behind the biker or puller, is the most unique type of transportation in Bangladesh. It requires human labor but does not cause pollution.

There is no air conditioning or heating system, since the weather does not reach cold temperatures like in the United States. The winters rarely get colder than 40 degrees Fahrenheit.

“Unlike here, people used to take showers in the rain quite often (because of the heat),” Muhit said.

Bangladesh has six distinct seasons — summer, rainy season, autumn, later autumn, winter and spring — each of which lasts approximately two months. Riding bikes is common in the suburbs and Muhit specifically misses riding her bike in the rain.

“I never saw snow before coming to the United States,” she said. “The one thing I’ll never forget are the snowflakes. … And every one of them is different from the other. It’s very artistic.”

She describes Bangladesh as being very green with many plains, fields and rivers and is known as the Land of Rivers. The Cox’s Bazar is the longest sea beach in the world.

“I really miss when spring is coming because the monsoon breeze has a special warmth and smell,” she said. “I really miss the smell of my country.”

Bangladesh’s main food is rice and a variety of fish. Spices and vegetables are also popular.

Muhit misses teashops or teas stalls, where she would drink tea and meet with friends. “You can find roadside tea stalls or many small stationary stores every two blocks walking distance from your home,” she said.

In Bangladesh, 11th and 12th grade are considered the first two years of college. Tuition is free in public universities, but it is difficult to be admitted into a university.

“People will walk by you and give you a smile and it’s really welcoming,” she said. “We don’t feel like we are really a foreigner here. It’s really appreciating.” 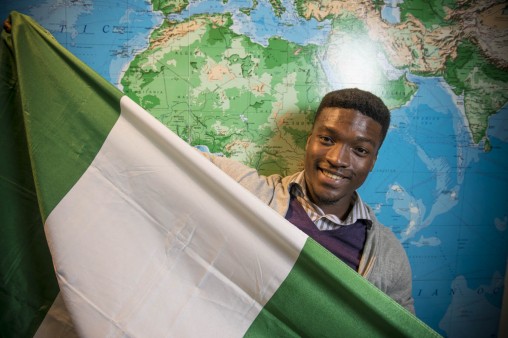 As the most populated country in Africa, Nigeria is known as the “Giant of Africa.” Nigeria has more youth than most other countries in the world and is home to safari destinations, tribes and soccer, all the while speaking English.

“There you would meet a lot of strong-willed and talented people with very unique personalities,” said Chugo Chiobi. “Additionally, people are also willing to offer help, whether it’s giving a ride to someone who is walking in the rain or buying food for a poor hungry person.”

In 1996, Nigeria’s national soccer team made history, winning the gold medal in the Olympics.

“Nigeria was the nicest place to be in because everyone who loved soccer were in a state of euphoria,” Chiobi recalled. “That was a lot of happy people.”

Nigeria has tropical weather with many waterfalls and rainforests. The Cross River National park is a popular safari destination and the Zuma Rock is a large mountainous-like rock.

“We travel for family holidays a whole lot, especially to the various tourist and historical sites around the country,” Chiobi said.

With music and bright colors, Southern Nigeria has one of the largest street festivals in Africa, the Calabar Carnival, similar to London’s Nottingham Carnival, Chiobi said. The festival includes global artists, beautiful regalia and colorful costumes.

In Nigeria, tips are considered bribes, stop signs are rare, and elderly individuals must always be addressed as “Mr.” or “Mrs.,” said Chiobi.

Nigeria has about 300 tribes with three major tribes, the Igbo, the Yoruba and the Hausa. Chiobi is part of the Igbo tribe.

“Each and every one of them stand out for a particular reason,” said Chiobi. He described the Igbos as businessmen, international traders and well educated. The Yorubas are a caring tribe who also throw many parties. The Hausas are very friendly and are skilled in diplomacy and politics.

Another difference is the patriotism in America. “Patriotism to state and country is incredible here,” Chiobi said. “I think that is quite admirable.” 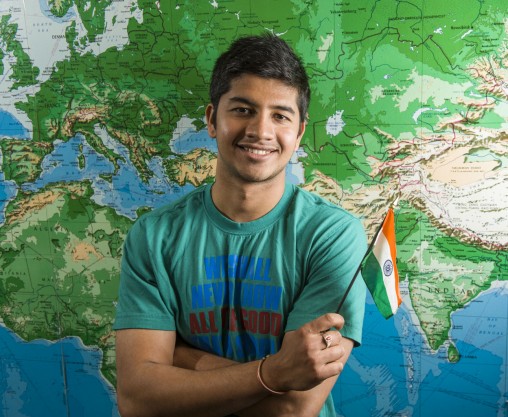 Bright colors and an original Bollywood sound distinguish India from many countries.

Since there are more vehicles and traffic in India, says Akash Atmaram, there is no speed limit. Police are strict on highways to avoid accidents.

“Here … people drive carefully and they follow in a lane. … There, you just fill up space,” he said.

Drivers involved in a car accident may be helped by others without calling the police first. Pedestrians or other civilians on the scene will take anyone injured to the hospital as people are very helpful, Atmaram said.

Classes are more fun and interactive, said Atmaram. “We also have parent-teacher meetings often to keep track of students’ record,” he said. Attendance is important.

“Professors are very friendly and always available for students as there are no particular office hours to meet them. They are available all the time,” he said.

Weather is another difference. “Here, we’re actually lucky to see all the four seasons,” he said.

Long-distance walking is common in India, along with affordable restaurant prices, small street shops, smoking and small families with one to two kids due to an increased education in family planning.