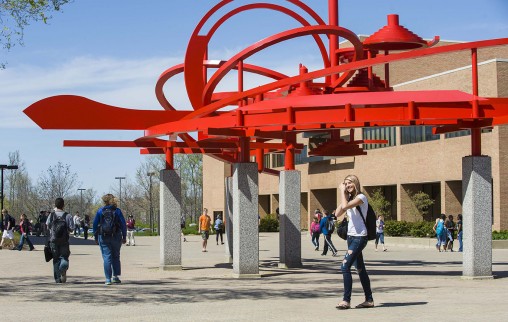 Wright State University ranks among the top 17 percent of colleges and universities in the nation in providing upward economic and social mobility to its students, according to CollegeNET, Inc.

Wright State ranks No. 161 out of 930 colleges and universities around the country in CollegeNET’s 2015 Social Mobility Index. In Ohio, Wright State is No. 3, ranked only behind the University of Toledo and University of Mount Union.

A school can most dramatically move itself up in the rankings by lowering its tuition and/or increasing its percentage of economically disadvantaged students — those whose family incomes are less than or equal to the national median of $48,000.

Wright State has an annual tuition of $8,542. One in three of its students comes from low-income households. And graduates earn a median early career salary of $46,400.

The index is computed from published tuition, percent of student body whose families are below the U.S. median income, graduation rate, reported median salary zero to five years after graduation and endowment.

Economic mobility occurs when students from disadvantaged economic backgrounds apply to college, graduate, get hired and move up the economic ladder. But the process is stopped in its tracks if students are repelled at the start by high tuition or complex financial aid processes.

“Lowering tuition and recruiting more economically disadvantaged students to participate in higher education is the basis for improving economic mobility,” CollegeNET said in a statement.

CollegeNET, Inc. is a Portland, Oregon-based developer of web technology for higher education and nonprofits. It also operates a scholarship search engine and a social networking forum that awards scholarships. More than 1,300 colleges, universities and nonprofits use its web-based administrative services.