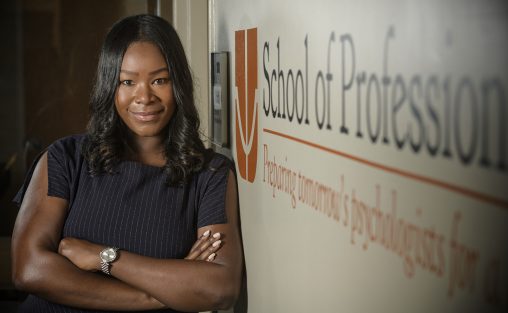 It was while doing psychological evaluations for the adult criminal court system that Janelle Dixon, a doctoral student at the Wright State University School of Professional Psychology, found her true calling.

Dixon was working in her practicum at Court Clinic Forensic Services in Cincinnati and came into regular contact with incarcerated people, many of them with mental illnesses.

“It was something that really just ignited a fire in me,” said Dixon. “Individuals in the criminal justice system are often stigmatized and deemed unworthy of assistance and empathy. However, as I meet with defendants, I often look into the faces of many individuals who have experienced trauma and are in desperate need of intervention.”

The experience has pointed Dixon to a career path in forensic psychology. And despite a heavy load of studies and work, she has found time take on a national leadership role in her field.

Dixon is active in The Association of Black Psychologists. In 2017, she was elected as the Midwestern graduate representative to the board of the association’s Student Circle.

The association was founded in 1968 in San Francisco and is headquartered in Washington, D.C. Its mission is to promote and advance the profession of black psychology, influence social change and develop programs in which black psychologists can help solve problems of black communities and other ethnic groups.

The association’s Student Circle consists of several hundred students located on college campuses nationwide. Its mission is to increase the academic and professional development of its members. Members of the Student Circle have access to scholarship opportunities, leadership development, professional networks and scholarly writing opportunities.

Dixon said the association uses African principles to assist with the liberation of black and African people. Black psychology addresses mental health and social problems that are negatively affecting the overall wellbeing of black people. In her role with Student Circle, she helps provide direction to students in the Midwest region and assists them in projects and goals related to the association.

Dixon is also a recipient of the prestigious American Psychological Association Minority Fellowship Program Predoctoral Mental Health and Substance Abuse Services (MHSAS) Fellowship, only the second woman from SOPP to ever receive it.

“It’s a very humbling experience to receive the fellowship considering how competitive it is,” she said.

But much of Dixon’s interest was in severe mental illness. She was struck by the chemistry that causes mental illness and how debilitating and stigmatizing it can be. Her practicum was at a Los Angeles community mental health agency where most of the patients she worked with had severe mental illnesses, specifically schizophrenia or bipolar disorder.

Dixon earned her master’s degree in 2012 and later worked at Children’s National Medical Center in Washington, D.C., where she did therapy on the inpatient child and adolescent psychiatric unit. In 2015, she arrived at Wright State to pursue her doctorate at SOPP.

“I chose to attend SOPP because of the program’s emphasis on diversity,” she said. “The program’s commitment to diversity can be seen not only in the curriculum but also in the faculty, staff and students.”

Dixon’s dissertation, which focuses on women in the legal system, is titled “DBT-Informed Parenting Skills Training for Mothers with Borderline Personality Disorder Who are Involved with Child Protective Services.”

“My passion for social justice advocacy influenced my interest in the intersection of psychology and law and becoming a forensic psychologist,” she said. “I am dedicated to promoting social justice by advocating for individuals who are experiencing injustice in the criminal justice system. It is my hope to be a forensic psychologist who is able to treat incarcerated individuals with dignity and respect and to handle their cases objectively and justly.”