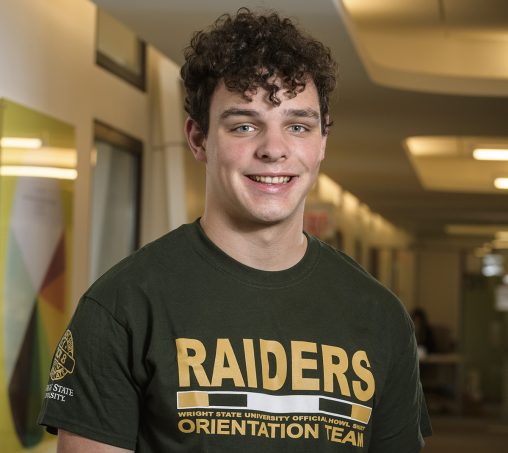 Thanks to a SMART scholarship from the Defense Department, Cameron Sterrett, an applied mathematics major at Wright State, has an internship and full-time job lined up after he graduates.

Everything seems to be adding up for Cameron Sterrett.

The Wright State University applied mathematics major is on full scholarship courtesy of the Department of Defense, conducts research at Wright-Patterson Air Force Base, and has been promised a full-time job following graduation.

And the numbers are also strong for Sterrett outside of the classroom and the lab. He has been heavily involved in extracurricular activities. Sterrett is president of Club Basketball and treasurer of Troupe, a student theatre group that specializes in improvisation. He is also active in the Student Honors Association, the orientation team, the math and philosophy clubs, Catholic Campus Ministries, the Take Flight leadership retreat and bombball.

Sterrett, an honors student who also tutors at the Math Learning Center, said Wright State has prepared him for success with its caring faculty members and by enabling him to make an impact as a student.

“Wright State is a healthy medium in size where it provides everything that you need while still being able to make a difference on campus as a student,” he said.

Sterrett grew up in Eaton. He enrolled at Wright State after graduating from Tri-Village High School in 2018 as co-valedictorian.

“With Wright-Patterson Air Force Base being right next door, I knew it would bring a lot of opportunities for me in the math field,” he said. “The valedictorian scholarship and competitive honors scholarship were major influencers in my decision to attend Wright State.”

In addition to majoring in applied mathematics, Sterrett minors in both computer science and statistics.

Sterrett will begin his internship postgraduation as an operations research analyst at the Headquarters Air Force Materiel Command at Wright-Patterson.

This summer he is working at Wright-Patterson’s Air Force Institute of Technology (AFIT) helping do research on a physics-based machine learning approach for investigating the oxidation of metallic alloys.

“The most difficult part has been understanding the chemistry and material sciences behind this research since my background is in math,” he said.

Sterrett’s long-term career goal is to earn his master’s degree in applied mathematics and then his doctorate in data science or operations research.

“I would like to explore the field of data science after I complete my service agreement as an operations research analyst at AFMC,” he said. “Data science interests me because of the combination of mathematics and computer software use.”