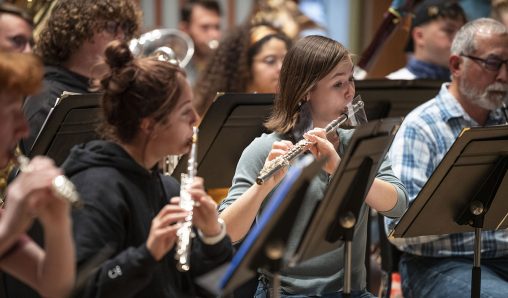 The Wright State Wind Symphony and Concert Band will perform in concert on Thursday, Nov. 18, at 7:30 p.m. in Schuster Hall in the Creative Arts Center.

Wright State University’s Wind Symphony and Concert Band will premiere two new works, including a composition commemorating those who died in the 2019 Oregon District shooting, during their first full concert in more than 18 months.

The Celebrating Music Together Concert takes place Thursday, Nov. 18, at 7:30 p.m. in Schuster Hall in the Creative Arts Center.

The concert is free and tickets are not required. Masks must be worn inside all buildings on Wright State’s campus.

The Wind Symphony and Concert Band will be conducted by Shelley Jagow, Ph.D., professor of music and director of bands at Wright State.

The Nov. 18 performance will be the bands’ first full concert on campus since the start of the pandemic.

The Wind Symphony’s performance will feature the Ohio premiere of “Horror Vacui” (2021) by Andrew D. Perkins and “Some treasures are heavy with human tears” (2021) by John Mackey, an Ohio native who has written primarily for wind ensembles as well as for orchestras and dance.

“Some treasures are heavy with human tears” was commissioned by a consortium of local high schools led by Bellbrook High School and its director of bands, Barbara Siler. The piece commemorates the lives lost in the Oregon District tragedy.

“We hope the piece will help bring resolution, strength and healing to the greater Dayton community and to all those who hear it,” Jagow said.

During a visit to Wright State on Oct. 20, Mackey worked with the Wind Symphony on the new piece. 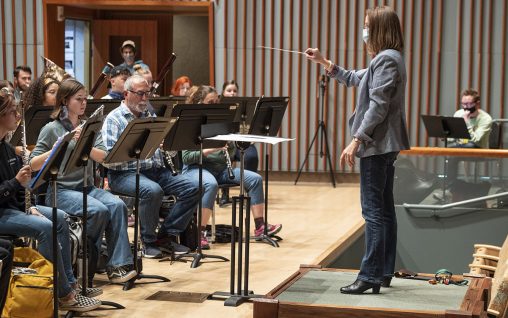 Jagow is a member of a consortium of music educators who promote the composition of wind band literature that commissioned Perkins’ “Horror Vacui.” Perkins is an award-winning American composer and Grammy-nominated music educator living in Michigan.

The Concert Band is a performing wind band open to all Wright State students. The band’s student members come from a wide variety of fields of study. The band performs musical repertory ranging from pop concerts to wind band classics and contemporary compositions.

She is a contributing author to both “The Music Director’s Cookbook” and “Teaching Music Through Performance in Band” and is the author of “Teaching Instrumental Music: Developing the Complete Band Program.”