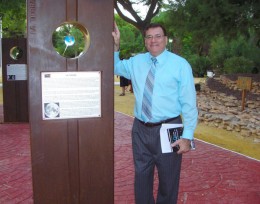 Wright State professor Julian Gomez-Cambronero, Ph.D., designed a scale model of the solar system in his hometown in Spain.

Five years ago, Julian Gomez-Cambronero’s daughter, Julia, came home with homework from her fifth grade science class. The assignment was fairly simple: draw a picture of our solar system.

Cambronero, Ph.D., a Wright State University professor of biochemistry and molecular biology, instantly took interest in the assignment. He had always loved astronomy as a hobby and even had his own telescope. He quickly found that the drawing wasn’t helping Julia understand the true scope of the solar system.

“I told her that just placing one planet after the other in a line does not represent the real distances,” said Cambronero. “In fact, Jupiter, Saturn and the outer planets are much farther away.”

Cambronero told his daughter to pretend that the Sun was in the kitchen of their Beavercreek, Ohio, home. If that were the case, he said, Mercury would be in the living room, Venus would be somewhere in the backyard.

But to get to Earth, he told her, they would need to cross the street. To reach Saturn, they would have to get in the car and drive to the school. Neptune would be in a shopping center and Pluto would probably be close to the next city, Xenia.

Cambronero realized that no one can really comprehend the scale of the solar system on a piece of paper. He thought that what was really needed was a large model that conveyed the distances.

“The more I thought about it, the more I became convinced that I could do it,” he said.

So he worked on the project in his spare time. In 2007, he published his idea in a magazine.

Not long after, Cambronero proposed the model to the mayor of his hometown of Manzanares, Spain. The mayor thought it would be a wonderful outdoor sculpture for the city park. 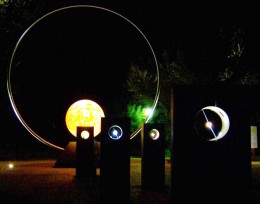 The sculpture is accessible for free to anyone wishing to learn about astronomy.

The city council agreed. The model would be housed in the Parque del Poligono in Manzanares, a city 100 miles south of Madrid in the La Mancha region of Spain (“the land of Don Quixote,” Cambronero joked).

Cambronero set to work on the design details and the blueprints for the model in his free time.

“It was a challenge for me because I have very little background in engineering,” he said.

Cambronero designed large, monoliths to hold each planet. The monoliths were constructed of steel with a protective coating. He wrote informative plaques describing each planet to mount on those monoliths. The planets themselves were made of fiberglass and painted with a special UV-resistant paint to withstand the elements.

He quickly ran into two obstacles. First, the distances between planets are actually variable depending on their location in orbit. Cambronero could only represent the averages.

He eventually settled on making the Earth about eight centimeters in diameter. That made Jupiter approximately a meter wide.

“But that would mean that the Sun needed to be nearly the size of the Epcot ball,” said Cambronero.

He came up with a compromise, an original “Monument to the Sun.” It consists of a large stainless steel ring that denotes the size that the Sun would be to scale. The sphere-shaped Sun model that rests inside the ring is about one quarter the diameter of the ring. 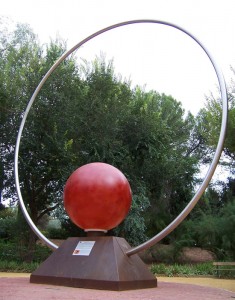 The project’s largest piece is this “Monument to the Sun.”

Cambronero even went as far as to display each planet tilted to the degree that it would be in real life.

Pluto was included in the model as a dwarf planet.

“I wanted things beyond Pluto to be represented, but I was running out of space,” said Cambronero. “I would have to go outside the park, all the way to Madrid, to add anything else.”

His solution was to add another monolith with a large plaque showing on a world map where other celestial objects, like the Oort Cloud, would be placed if the model were to continue. The farthest object represented is Proxima Centauri, the closest star to our own. It would need to be placed somewhere in Iceland.

Construction of the project began in early 2010 with full participation of the city’s technical personnel and a consultant artist. It was finished in September of the same year. With no cost for admission, anyone can explore the model, which stretches across a half-mile section of the park.

“This began as a scientific project, but it really evolved into a work of public art,” said Cambronero.

He calls the project a success, describing the positive feedback he’s received from those who have seen it. It has been well covered in the media, locals brag about it as a city treasure, and schools from across the region bring their students to it on field trips. Cambronero says he’s even received accolades from astronomers and scientific societies.

What’s next for Cambronero? He admits he’s toyed with the idea of similar projects in his own field of expertise, biological science. Perhaps he’ll create a large, walk-through model of a cell or the entire human body, he said.

“It’s part of my mission as a scientist to bring scientific knowledge to all citizens,” he said.

For more information (in Spanish with an English summary), visit http://www.manzanares.es/paseo-sistema-solar/.