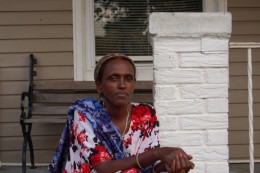 Imagine you have just arrived in the United States from Eritrea, Ethiopia or the Congo, fleeing hunger, war and an unstable government. At best, settling into a new life is a challenge. At worst, you have no home or family and face a discouraging language gap.

In such a dark time, a caring community and compassionate teachers are blessings. Luckily for African refugees in Dayton, both of those things exist.

Graduate students in Wright State University’s English 780: Writing and Social Activism worked all quarter with individuals from Dayton’s community of African immigrants and refugees. They concentrated on language proficiency, job and college applications, and other fundamental skills for navigating life in America.

To commemorate their achievements, the refugee community and the Wright State students decided to throw an end-of-the-school-year block party.

On Tuesday, May 31, Wright State students and faculty gathered with their African partners for an evening of games, music and traditional African food. City Commissioner Matt Joseph dropped in too.

As Sally Lamping, assistant professor of English, loaded her plate with goat curry and homemade donuts, she watched her students with delight.

“It was a really, really challenging situation,” she said of the class. Many of the African participants had shaky language skills, and the students had to be creative to make the situation productive. “I wanted them to have a lot of rope. I feel like when you take risks, that’s how you learn.”

Lamping said the class was very fluid, and that the content was created mostly by the students. They built their own English as a Second Language curricula in three levels, ranging from literacy-level to advanced, and broke participating African refugees into groups based on their grasp of English. Students also organized two follow-up projects.

One student, Jennifer Papdakis, organized a sewing collective among the women of the community, to teach basic literacy and create crafts to market online and at the local Second Street Market. Jade McDaniel, another student, created an English 102 service-learning class for fall 2011.

Fitsum Tekle, a young man from Eritrea, had been working with graduate student Lindsay Thomas to improve his English skills, find a job and apply to Wright State.

“Since I met these people—professor Sally, including her teachers, her students,” said Tekle, “I grasped a lot. I improved a lot in my language.”

Picking up slang, and picking up a new life in America. Tekle will join Wright State’s LEAP program (Learning English for Academic and Professional Purposes) at the beginning of summer quarter.

The jury is still out on when (or whether) English 780 will be offered again. Interested graduate students should keep an eye on the English department’s course offerings during the 2011-2012 school year.