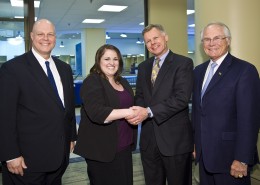 Ashley Leasure has worked in the Wright State University Department of Music as a student worker for just two years, but the impression she will leave will last long after that.

A senior undergraduate choral assistant from New Carlisle, Ohio, Leasure is the 2012 state of Ohio and Wright State University Student Employee of the Year.

As an employee of Wright State, Leasure has closely worked with chair of the music department, Randall Paul, D.M.A., as well as professors James Tipps and Bill Jobert. Ashley has been deeply involved in providing student leadership for the Mad River Vocal Arts Festival, Holidays in the Heartland and Bernstein’s MASS both as a performer and student employee.

“Simply put, Ashley Leasure is the finest undergraduate assistant that I have had at Wright State in my 20 years at the university, and one of the finest student assistants, undergraduate or graduate, that I’ve worked with anywhere,” wrote Director of Choral Studies Hank Dahlman, in Leasure’s nomination letter.

Dahlman says Leasure’s impact to the department has been felt in a myriad of important projects over the last two years, including:

“She defines reliability, professionalism and initiative, and works at a highly productive and independent level, with a minimum of supervision,” added Dahlman.

“She is the kind of person who looks for tasks, and looks for ways to do them better next time. Ashley, in a phrase, ‘gets it.’ She has literally helped rewrite the job description for this position, and reset the bar.”

Ashley is currently the choir director of the New Carlisle Church of the Brethren and the vocal director for Vandalia Youth Theater’s summer production of Legally Blonde: The Musical. Ashley will be graduating in June 2012, with a Bachelor of Music in music education and is looking forward to future opportunities in choral music.