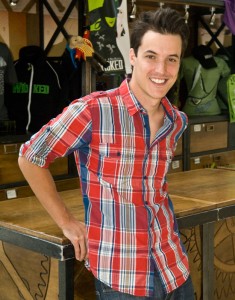 Wright State theatre graduate K. J. Hippensteel is in Dayton with the national tour of the hit musical “Wicked.”

K. J. Hippensteel didn’t always dream of being an actor. The Wright State theatre graduate originally focused his natural musical talent on playing the cello. But fate stepped in on a high school music trip to New York City.

“They took us to Les Miserables on Broadway to see the orchestra perform in the pit,” said Hippensteel. Mesmerized by the show, Hippensteel fell in love with the magic of live theatre. He decided to dump the cello for a life on the stage. “From that moment on, I was hooked,” he said.

Hippensteel graduated with a musical theatre B.F.A. in 2006 and has been acting ever since. He’s currently visiting Dayton with the national tour of Wicked, the Tony Award-winning musical about the two witches from The Wizard of Oz. The show also won a Grammy for its hit Stephen Schwartz songs like “Dancing through Life,” “Popular,” and “Defying Gravity.”

Hippensteel joined the traveling production six months ago as a member of the ensemble and the understudy to Fiyero, the male romantic lead. 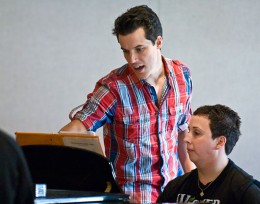 Hippensteel said that the Wright State theatre program helped him grow into a confident performer and propelled him to success.

“It’s a comedy,” he said, “so people laugh all the way through the show. But there’s a lot of depth to the show and it makes you think long after you leave the theatre. That’s what’s so beautiful about the show—it really catches you by surprise.”

He was attracted to the show for its strong characters, witty dialogue and intricate plot. His favorite scene in the show comes just after Dorothy’s house has killed the Wicked Witch of the East. Hippensteel’s character makes a grand entrance swinging to the stage on a rope.

“That’s a lot of fun,” he said of his Tarzan moment. “It takes me back to being a kid.”

Hippensteel said that he gravitates to shows, like Wicked, that are actor-driven. He attributes that to his training in college. “The Wright State program is acting-based, where it’s great if you can sing and dance, but only if you can approach your role as an actor first,” he said.

He said that the program helped him grow into a confident performer and propelled him to success. He fondly remembers his musical theatre classes, where he was able to practice with peers in a comfortable, supportive environment. 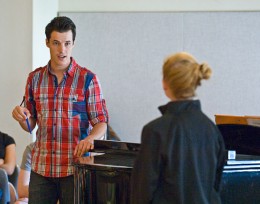 While in Dayton, Hippensteel is working with high school students who aspire to be actors.

“The professors at Wright State are really on top of their game,” said Hippensteel. “And the great thing is that each one has their own point of view.” He points to several professors who he saw as directors and others who have more of an actor’s perspective. Some come from a performance art background and some do lots of musicals, while others tend to do mostly plays.

“So you get a lot of different insights because they have a diverse range of experiences,” he said

In the fall of 2004, Hippensteel had high hopes of being cast in Wright State’s production of Stephen Sondheim’s fairy tale musical Into the Woods. He was instead cast in that quarter’s production Uncle Vanya, a somber play by Anton Chekov.

“I was very disappointed and I thought that I wasn’t right for it,” he said.

Yet through rehearsals Hippensteel began to embrace the character and recognize the quiet beauty of the play. He now cites Uncle Vanya as his favorite show from his college days.

“It stretched me in ways that I needed to be stretched,” he said. “It taught me that a play can be totally different on the stage than it reads on paper.” 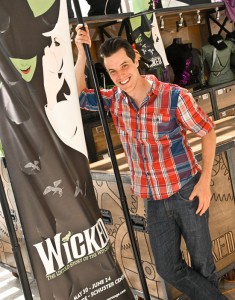 He was attracted to “Wicked” for its strong characters, witty dialogue and intricate plot.

After graduation, Hippensteel did a short stint at a New Jersey dinner theatre and performed on a cruise ship. He earned his Actors’ Equity card starring in a Florida production of Altar Boyz before moving to New York City.

Sure, he’s had his “survival jobs”—working as a waiter, a doorman or a handyman between shows—but Hippensteel says he’s been very fortunate as a working actor. In addition to Wicked, he’s had traveled the country with the first national tours of both The Wedding Singer and 9 to 5: The Musical.

Hippensteel loves life on the road, living out of suitcase, but getting to see “every nook and cranny of the country.” While he enjoys visiting new cities, he said it’s also nice to play in familiar places like Dayton.

“It’s a little strange to be back in a town I lived in,” said Hippensteel. “It takes me back to my college days and all those great memories.”