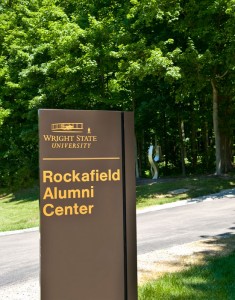 For the first time in 43 years, Rockafield House will serve Wright State University in a different capacity.

Built for the university’s first president, Brage Golding, in 1969 and subsequently occupied by Wright State’s first five presidents and their families, Rockafield House is now Rockafield Alumni Center, the new home for alumni returning to campus.

“We really want our alumni to feel welcome to come back to campus,” said Greg Scharer, executive director of alumni relations. “There wasn’t a building on campus, until now, solely designated for alumni activities.”

Scharer says the decision to re-purpose Rockafield House has been years in the making, and most of the credit should go to Alumni Association President Bruce Kline, Wright State President David R. Hopkins and the Board of Trustees.

The decision to move alumni operations there is possibly not permanent, Scharer pointed out. The board agreed to allow Rockafield to be used as an alumni center for the last three years of President Hopkins’ term, which is due to expire in 2015. At that time, the board will decide if it wants to offer the space to the next president. 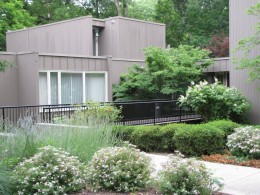 Wright State’s Rockafield Alumni Center, formerly Rockafield House, a home made available to the president of the university.

Scharer believes even a brief stay in Rockafield will make the case for a permanent alumni home on campus.

“Yes, it could be temporary, but if we utilize this building to its fullest potential, we then will have provided real proof that there is a need for a permanent Alumni Center,” said Scharer.

The on-campus portion of that equation Scharer considers to be critical.

“The whole idea of having an Alumni Center on campus is you want students to come there and interact with alumni,” said Scharer.

To that end, the Student Alumni Association will also have an office in the center, but Scharer says the current student angle is only one piece of the equation. 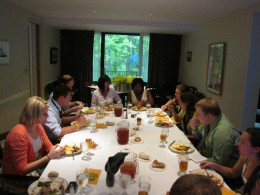 The First Annual Student Philanthropy Council’s Graduation Fund Donor Appreciation Dinner during Senior Week was one of the first events to take place in the new Rockafield Alumni Center.

By encouraging alumni to visit the center when they’re on campus, Scharer believes the alumni office will be able to track alumni activity better and offer supportive services like a space for alumni to park, work, socialize or even stay the night.

Scharer sees Rockafield adding historical perspective too. “There’s a lot of history and there’s really no place for alumni to come back to and reflect on that history,” said Scharer. “Alumni who do desire to come back to campus are sometimes confused with what campus looks like now, so it is nice to have a starting place for them. A place of welcome.”

Though there may be some challenges involved in converting what was designed to be a home into a work space, there is no doubting Rockafield’s ability to host an array of social gatherings, and Scharer intends to keep things busy.

In recent months the Alumni Association has hosted dinners, gatherings, wine tastings and receptions in the run-up to the move, and such events are only the beginning.

Plans are in the works for a club football game tailgate during Homecoming next fall, and several groups on campus are planning reunion events in the new center for next year. Whether it’s hosting a black tie reception before a theatre performance or a party for the next big game, Rockafield is sure to be busier than ever before.