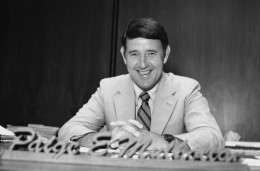 Paige Mulhollan is remembered on campus as a dynamic but “laid-back” president who took time to personally interact with faculty, staff and students.

Former Wright State University president, Paige E. Mulhollan, who established Wright State as a founding member of the Coalition of Urban and Metropolitan Universities, died Saturday in Fayetteville, Arkansas, at the age of  77.

“President Mulhollan was a visionary.  He recognized the importance of research excellence and community service as integral to the academic experience of our students,” said President David R. Hopkins. “Paige ushered in the full university experience for our students with his focus on the Student Union, campus housing and the Wright State University Nutter Center.  We are forever indebted to him.  And our hearts go out to his wife, Mary Bess and his sons, Paige, Jr. and Kelly.”

Community support for Wright State under President Mulhollan’s leadership continued to expand in the early 1990s. Research funding topped $20 million in 1991–92. In 1992, the Kellogg Foundation announced a $2 million grant to fund the Partners for Community Health Development Project. This was designed to improve health care delivery and develop innovative ways to train health care professionals in medicine, nursing and psychology.

His years marked an expansion of facilities and programs that enhance student and academic life: on-campus housing increased to nearly 2,000 students; the Ervin J. Nutter Center and the Fritz and Dolores Russ Engineering Center were built; and construction began on a new Student Union. When the Nutter Center was built, he was successful in making the facility much larger than the original plan for a building originally conceived as just a basketball arena. He literally doubled the size to make in the multi-use facility it is today.

Dr. Mulhollan is remembered on campus as a dynamic but “laid-back” president who took time to personally interact with faculty, staff and students. He was fond of sailing. During his presidency, he could often be found taking lunchtime jogs around campus or exercising his golden retrievers, Sunshine and Autumn, on the lawn of Rockafield House, then the campus president’s residence, with his wife, Mary Bess.

“A university is a very complex organization,” he once said. “If you commit yourself to one point of view, you are not going to be able to serve all sectors of the community. I feel it’s important to be flexible and tolerant, adapting yourself and your attitudes to circumstances as they come up.”

He was active in educational associations, the fine arts and the humanities. He served as consultant-examiner for the North Central Education Association, consultant for the Education Programs Division of the National Endowment for the Humanities, chair of the Oklahoma Humanities Committee and member of the Commission on Fine Arts. He was a founding member of the executive committee of the Division of Urban Affairs of the National Association of State Universities and Land-Grant Colleges and served on a similar committee in the American Association of State Colleges and Universities.

In a 1986 article in the Wright State University student newspaper, he said, “I think that one of the biggest mistakes people make in looking at someone’s career is to assume they have taken a long-term look at where they were going. I got into administration entirely by accident . . . I never had a timetable for where I would be at different points in my career. If you do your job and pay attention to what you’re supposed to be accomplishing, opportunities will come, and the future will take care of itself.”

In retirement, Paige and Mary Bess lived in Arkansas. He is survived by his wife, Mary Bess, his sons Paige Jr. and Kelly, three grandchildren and a great-grandchild.