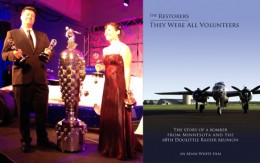 White (at left) has worked in the film industry for nearly 20 years.

A documentary about a restored B-25 bomber that participated in the famous Doolittle Raiders bombing run of Japan has netted its director, a Wright State alumnus, two regional Emmys.

Director and Wright State grad Adam White and producer Kara Martinelli won for Writing (Program) and Technical Achievement for their documentary film, The Restorers: They Were All Volunteers.

“We are grateful to our crew, Western Reserve PBS, the Minnesota Commemorative Air Force, and the Doolittle Tokyo Raiders for volunteering for all of us, to go out and help save the world,” said White.

White, who graduated from Wright State University in 1995 with a B.F.A. in motion picture production, has worked in the film industry for almost 20 years and is based in Cleveland.

“We would like to dedicate the award to the WWII heroes, and also for myself, to my grandfather, who was also a WWII veteran,” said Martinelli.

On April 18, 1942, Gen. James Doolittle led the Doolittle Tokyo Raiders on a top-secret mission that would strike back at the heart of Japan after the attack on Pearl Harbor four months earlier. The Raiders launched their B-25 Mitchell Bombers off an aircraft carrier that would get them close to the home island of Japan. The dangerous bombing mission was a great success, boosting much-needed morale for the United States.

Each year the famous Doolittle Tokyo Raiders from WWII have a reunion to remember their mission, their comrades and their heroic leader, Gen. James Doolittle. In 2010, an extraordinary event took place. For the 68th Doolittle reunion, seventeen B-25 bomber crews volunteered to gather in honor of the Raiders. Over 70,000 people turned up to witness the event, to see the bombers and to meet the remaining Raiders.

The Restorers: They Were All Volunteers follows the journey of a Minnesota restored B-25 bomber, named Miss Mitchell, as she travels to Dayton to attend the Raider Reunion.

The Restorers: They Were All Volunteers is the pilot episode of a series now under development by Hemlock Films. Investors are currently being solicited for the new series, also titled The Restorers.

Visit http://www.TheRestorers.com for more information about the documentary.