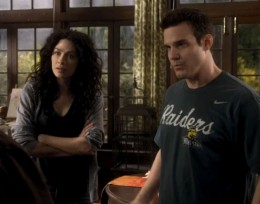 Courtesy the SyFy Channel, McClintock at right in the most recent Warehouse 13 episode from season four, “An Evil Within.”

Eddie McClintock, star of the SyFy channel’s Warehouse 13, wore a Wright State Raiders T-shirt in the second episode of season four, “An Evil Within,” which aired Monday, July 30.

McClintock later tweeted a shout-out to the Wright State community and Raider athletics. 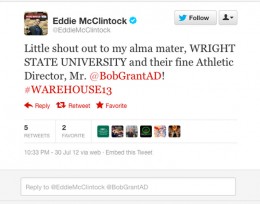 A former wrestler at Wright State, McClintock graduated in 1991 with a B.A. in Communication Studies from the College of Liberal Arts.

While McClintock is currently portraying the role of secret service agent Peter Lattimer on SyFy’s Warehouse 13, over his acting career he has appeared in 10 pilots, starred in five network series, worked on several television movies and made well over 45 guest appearances on over 25 different shows. 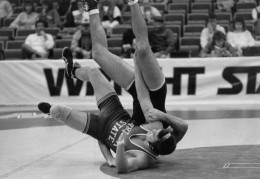 Eddie McClintock as a Wright State wrestler grappling on the mat.