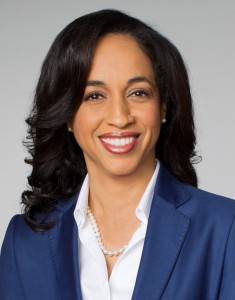 As part of her Women’s History Month residency, Geraldine Moriba will deliver the second Anita Hill Annual Lecture on Gender Justice on March 13.

As part of her residency, Moriba will deliver the second Anita Hill Annual Lecture on Gender Justice, also the Women’s History Month keynote address, from 12:30 to 2 p.m. on Thursday, March 13, in the Millett Hall atrium. The talk is free and open to the public.

Moriba will also visit a class, meet with student leaders and faculty, and conduct a workshop, “Women of Color in Leadership,” for students. The workshop, scheduled for March 13, 9:30–10:50 a.m. in 494 Allyn Hall, will examine how identity can influence how women and especially women of color are treated in professional settings. Wright State students can register for the workshop by calling the Women’s Center at (937) 775-4524.

Wright State was selected as the location of the traveling Anita Hill Lecture on Gender Justice, which is organized by Soapbox, Inc., a speakers bureau for feminist voices founded by authors and activists Amy Richards and Jennifer Baumgardner. Richards and Baumgardner spoke at Wright State in 2008 as part of the 15th anniversary celebration of the Women’s Center.

The lecture was created to highlight a commitment to gender and racial justice and promote individuals who inspire audiences to embark on gender awareness and crusades for justice.

As vice president of diversity and inclusion for CNN Worldwide, Moriba chairs CNN’s Diversity Council, offers strategic guidance on issues of diversity to the CNN management team, and serves as an executive producer for original program development.

Moriba led CNN’s In America documentary team in the creation of 11 documentaries and launched the In America blog, which became one of the most popular CNN.com blogs.

She joined CNN in 2010 after 16 years at NBC News, where she served as senior producer for broadcast standards, produced award-winning stories and was co-chair of NBC News’ Diversity Council.

Amber Vlasnik, the director of the Women’s Center, said Women’s History Month is more than an annual event.

“It’s also an ongoing conversation about the accomplishments, contributions, possibilities and challenges for women in our society,” she said. “Bringing (Moriba) here as part of our residency program, having a Women’s History Month residency, is one way Wright State participates in this larger conversation.”

Moriba’s residency also provides an important opportunity for students to interact with such an accomplished professional, Vlasnik said.

“She has achieved enormous success in her career and is in a new position at CNN that shows the impact of how diversity is being valued,” Vlasnik said.

“It’s always impactful for students to have multiple opportunities to interact with a speaker,” she said. “I think it shows them possibilities for themselves, for the future, in their career, their professional lives, their personal lives and their leadership.”