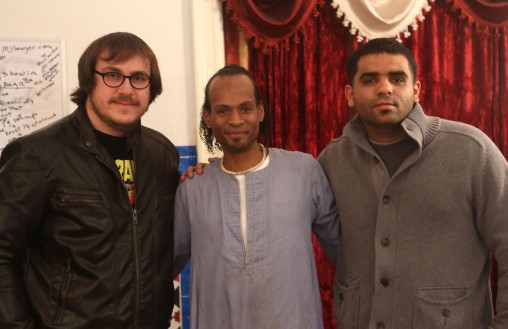 Wright State grads Josh Deane (left) and Yasser Souisri (right) with Tarik Sultan, the star of The Sultan, which will play at the Cannes Short Film Corner.

Josh Deane and Yasser Souisri, both of whom graduated from Wright State’s Motion Pictures program May 3, will travel to France when their documentary The Sultan plays at the Short Film Corner at Cannes May 14–25.

Though not part of the film festival’s competition, the Short Film Corner is an opportunity for filmmakers to show their films and enter them into the film corner database, promote projects and meet other producers and film buyers.

The Sultan is intimate portrait of Tarik Sultan, a male belly dancer struggling with self-image and making a living as an artist in our culture.

“It’s kind of unreal. I’m just stepping out the door immediately from school … and this is the first thing we’re doing—going to Cannes,” Deane said.

Souisri, who was born in Algeria, said Cannes is a perfect place to reach an international audience. “It’s important for me to see how my work is viewed through different cultures, different people,” he said.

Deane and Souisri created The Sultan during their junior year. Deane directed the film and Souisri was director of photography.

The 11-minute film is an intimate portrait of Tarik Sultan, a male belly dancer in New York struggling with self-image and making a living as an artist in our culture.

Souisri said he was initially interested in creating a film about belly dancing because of its popularity in Algerian culture and throughout the Middle East. But as they worked on the film, it evolved into a closer examination of Sultan, not dancing.

“That’s the beauty of documentary,” Souisri said. “You never know what you’re going to end up with.” 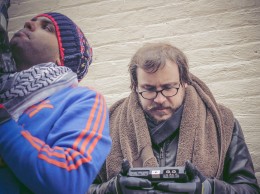 Yasser Souisri and Josh Deane on location of their forthcoming film Dollhouse.

The filmmakers were especially intrigued by the fact that Sultan is a male belly dancer. “We thought, what drives someone to do something that seems so opposite to what the social norms should be?”

Deane said. After talking to Sultan, Deane said, they learned he dances simply because he enjoys it.

Deane and Souisri, who operate 5181 Productions, also produced Dollhouse, a short film they plan to submit to festivals and will premiere at Wright State’s Big Lens Film Festival in August.

While in Cannes, they will be able to view films in the competition, promote The Sultan, attend meetings and educational activities and meet others in the film industry.

“This time we’re going to the Short Film Corner,” Souisri said, “hopefully next time we get into the main competition and it goes on from there.”