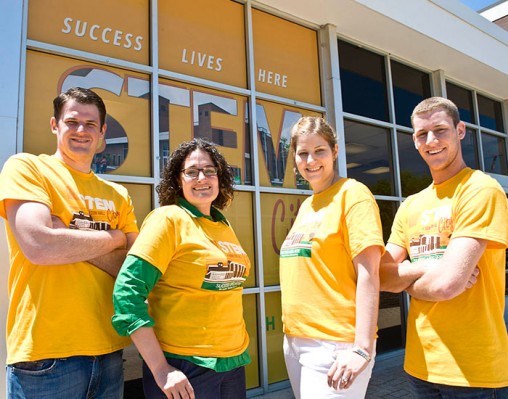 When you live together, you learn together. This is the slogan that prompted the construction of Wright State’s newest micro metropolis, STEM City.

Residential learning communities like STEM City are becoming a popular trend among universities all over the country. They have been proven effective to get students involved in their discipline—as they collaborate with their peers, grades go up.

By coordinating the efforts between COSM, CECS and Residence Services, Papadakis laid the city’s first building blocks just six short months ago. Now, over the summer months, hundreds of students are laying claim to their piece of the pie—350 students are projected to live in STEM City during the 2014–15 academic year. 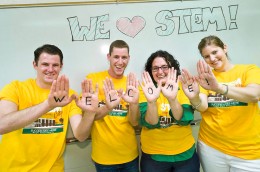 “We want STEM City residents to forge relationships with faculty members, get into undergraduate research earlier and most importantly, connect with the community that will help and support them throughout their time at Wright State,” said Papadakis.

“The retention rates are particularly bad for STEM fields,” she said. “We know that students pursuing the sciences are a traditionally at-risk population. After a while, they can become discouraged by how difficult these disciplines are. Without increased support, their success is a little more difficult to obtain. In a way, we’re just moving the support services we offer in the departments’ offices to the residence hall.”

Because of this fortified support system, STEM City’s residents are projected to fare better in academics than the most recent COSM and CECS residential class. Papadakis and other STEM City coordinators will pay close attention to the GPAs and retention rates of 60 randomly selected students. By tracking these students’ success rates, coordinators can figure out what works and what doesn’t.

“We’re paying attention to both the qualitative and quantitative data of this project,” said Papadakis. “After the completion of the first year of STEM City, we’ll look to see if the pilot cohort is happier, more involved in campus life and whether they took greater advantage of tutoring and other academic resources.”

The dream is to make STEM City the number one place at Wright State for students of all academic standings to find a community that instantly makes them feel like an engineer, scientist or mathematician.

With such a tightly knit group of innovative students, Papadakis said that anything is possible.

“The first group of students to populate STEM City will have the creative freedom to shape where they live,” she said. “They will have a direct hand in saying what works and what doesn’t. If they want to figure out a way to put wind turbines on the roof to power their Xboxes or gaming systems, we’ll let them.”