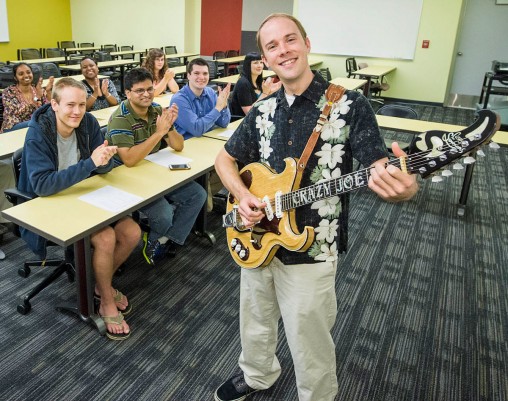 Joe Tritschler has toured the world as a musician under the moniker “Crazy Joe,” built a home recording studio, earned a Ph.D. in electrical engineering and now teaches in the College of Engineering and Computer Science.

As a kid, Joe Tritschler learned how to solder, build electronic equipment and play the guitar. He built his first solid electric guitar in his junior high shop class because his parents wouldn’t buy him one.

He learned these skills alongside his father, Tony Tritschler, an electrical engineer and audiophile who loved to tinker with his audio system and play records around the house.

Joe learned to play the guitar when he was 7 and would take over his father’s workshop and build things like small amps, guitar-effects pedals and a vacuum-tube reverb unit.

“I destroyed his workbench when I was an elementary school kid,” Tritschler said. “He could tell when I was down there fooling around because there’d be tools everywhere.”

Those lessons have stuck with Tritschler.

He has toured the world as a musician under the moniker “Crazy Joe,” earned a Ph.D. in electrical engineering and now teaches in Wright State’s College of Engineering and Computer Science. And he continues to tinker with electronics, building a home studio in his basement. 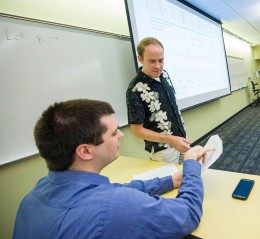 An instructor in the Department of Biomedical, Industrial and Human Factors Engineering, Joe Tritschler received the CECS “Excellence in Teaching Award for Faculty, 2013–2014.”

As an instructor in the Department of Biomedical, Industrial and Human Factors Engineering, Tritschler primarily teaches first- and second-year engineering courses, which means his students are often learning concepts and formulae they’ve never seen before. He works hard to ensure they leave his classes with a strong foundation in engineering.

“If they get lost early in their education it can be very difficult for them down the line when they get into their senior-level classes,” he said. “If I can reach out to them and break something down for them so they can say, ‘I really understand this,’ that’s very gratifying.”

Last spring, Tritschler received the college’s “Excellence in Teaching Award for Faculty, 2013–2014.” Student input was a major criterion for the award.

“This teaching job that I have is a dream come true,” he said.

While around campus, Tritschler may be Dr. Tritschler, around Dayton he’s know as Crazy Joe, a singer and guitar player who toured with rockabilly stalwart Deke Dickerson and has put out five albums, including “The Doctor Is IN!,” released last year.

Tritschler became serious about music when he was 12 when he won a Coyle Music contest as the best up-and-coming guitarist under 17.

“That’s when I started playing all the time and even considered playing professionally,” he said.

He gained his moniker when he formed his first professional band, Crazy Joe and the Mad River Outlaws, as an undergrad. “Crazy Joe,” he said, “sounded good for a really fast psycho-billy band.”

The band started building a serious following when Mick Montgomery, who owned Canal Street Tavern in downtown Dayton, invited them to open up for Deke Dickerson and the Rev. Horton Heat.

Over the years, Tritschler’s sound has changed, shifting from fast rockabilly to old 1950s country to a Roy Orbison-like softer country roots style. His next record, he says, will probably have an upbeat, fun rock and roll sound.

After touring with Dickerson for two year, Tritschler got off the road so he could finish his Ph.D. and teach. He also missed working on electronics and on his house. 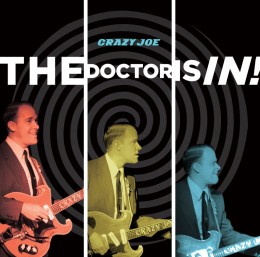 Joe Tritschler has released five albums, including last year’s “The Doctor Is IN!”

His home studio is filled with analog equipment that he built by hand. It’s where he produced his albums and a new LP by former Mad River Outlaw Rob Heiliger.

“For some reason, even when I was a teenager, I liked old technology, old recoding technology,” Tritschler said.

Though digital recording technology was becoming more affordable it never appealed to him. “I was always into old analog tape machines and vacuum tube microphones and preamps and things like that,” he said.

Tritschler still performs at a number of festivals, including the Viva Las Vegas Rockabilly Weekender and Rockabilly Rave and Hot Rod Hayride, both of which are in England. He also plays about half dozen local shows a year.

Yes, his students are often in the audience. When he was an adjunct teaching electrical engineering at Wright State, he would write the date of his next gig on the board then quickly erase it so they would know about the show. These days, he doesn’t announce his gigs but students still learn about his shows through word of mouth.

It’s also not uncommon for him to arrive to class early and see a YouTube video of himself playing on a screen.

“Every once in a while they’ll slip and make a reference to one of my song lyrics,” he said. “Sooner or later they find out about the other thing I do.”

For Tritschler, music and teaching have a lot in common. Being on stage helped him develop the skill to read his students and gauge their interest in a lecture.

“Teaching a lecture on biomechanics is really a lot like playing a gig,” he said. “If you can capture their attention it probably means you’re doing a good job.”