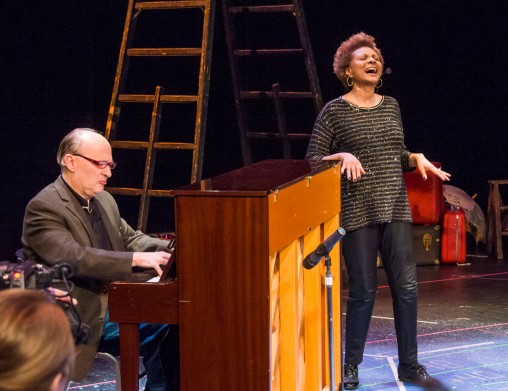 Uggams, who has won Tony and Emmy Awards, also sang several songs, shared stories from her long career and gave heartfelt advice to an audience of students, faculty and community members in the Herbst Theatre in the Creative Arts Center.

Brought to campus by the Musical Theatre Initiative at Wright State, Uggams led a master class during which 12 students sang for her and Don Rebic, her music director and composer and jazz musician. Uggams and Rebic provided the students detailed individual feedback on their singing and song selections.

“I can see you on Broadway,” Uggams told senior Sean Jones after he sang “I’m Just a Small Town Boy.”

“That’s a really nice boost of confidence to get before graduation and going out into the world — because like she said later it is a business of rejection,” Jones said after his performance. “That’s something that I’m ready to take on, but it is also nice to hear those positive things like ‘you can do it.'”

Senior Emma Jordan said she was grateful that “Wright State is able to have the finances and the faculty that cares enough to bring people who are so important in this industry to work with us.” 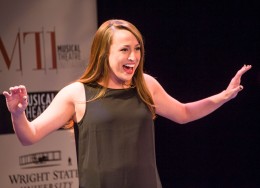 She shared stories from early in her career when she performed at the Apollo Theater; talked about playing Kizzy on “Roots,” the role she may be best known for; and discussed working with Pulitzer Prize-winning playwright August Wilson.

Uggams also offered advice to students, providing tips for auditions and encouraging them to pick material that best showcases their individual talents.

She told the students to be brave, confident and persistent. She said when you walk in to an audition you need to have an attitude that says: “World, you have not seen anything until you’ve seen me.”

Several students said they were nervous but excited about singing in front of such a big star. “It was really great to be in front of someone who is a legend,” Jones said. “It’s nerve-wracking but euphoric at the same time.”

Jordan said she and the other performers told each other if they can sing for someone like Uggams they can audition for anyone. “She was so kind and generous, and that was amazing,” Jordan said.

Uggams also worked privately with a select group of six musical theatre students who will perform with her in concert at Dayton’s Victoria Theatre on Jan. 23.

Uggams is the first major visiting artist brought to campus by the Musical Theatre Initiative at Wright State, which celebrates and explores the history, culture and craft of the musical theatre through guest artist residencies, concert performances and international conferences.

Deer described Uggams’ visit as inspiring for students and faculty. Uggams affirmed what performing arts faculty have been teaching students, said Deer, who performed with Uggams about 25 years ago on Broadway and on the national tour of “Anything Goes.”

“It’s everything you want a guest artist to do. It’s a very potent shot in the arm of the best kind of medicine,” he said.

Deer also said it was exciting to see the effect Uggams had on students.

“To see the kind of focus and intensity of her work both as an artist and as a teacher is incredible,” he said. “It’s exactly what I hoped the Musical Theater Initiative would do for our students.” 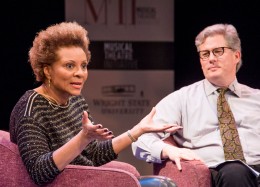 On Friday, Jan. 23, Uggams will sing classic and contemporary standards at 8 p.m. at the Victoria Theatre in downtown Dayton. Tickets are $47 and $37 for the public; $17 for Wright State faculty and staff; and $7 for all students. Tickets may be ordered at ticketcenterstage.com or (937) 228-3630.

Uggams is the latest in an all-star lineup of performers who have visited Wright State to work with students. In 2013 renowned Broadway composer Stephen Schwartz came to Wright State as part of the Distinguished Visiting Artist Series, sponsored by Wright State’s Ohio Center of Excellence in Collaborative Education, Leadership and Innovation in the Arts (CELIA).

This March, Keith Lockhart, conductor of the Boston Pops and the BBC Concert Orchestra, will spend a week working with students at Wright State and will serve as guest conductor for two performances of Benjamin Britten’s “War Requiem,” featuring the Dayton Philharmonic Orchestra and Chorus and Wright State Choirs.

More than 150 students, faculty and community members attended Leslie Uggams’ master class and Q&A in the Herbst Theatre in the Creative Arts Center.

Leslie Uggams offered advice to students and told them to be brave, confident and persistent.