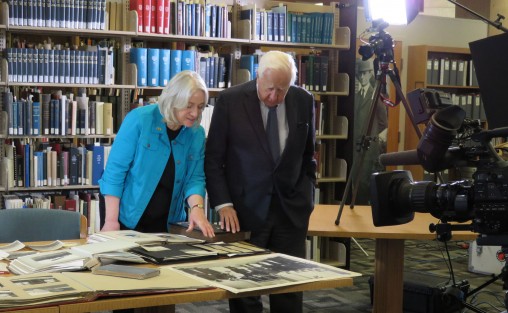 Wright State University’s Special Collections and Archives and its Wright Brothers Collection were featured in an interview with author David McCullough that aired on “CBS Sunday Morning” May 3.

Watch the report from CBS News >>

Special Collections and Archives hosted McCullough and a crew from “CBS Sunday Morning” on March 31 to film an interview on the author’s new book, “The Wright Brothers.”

McCullough discussed items from the Wright Brothers Collection and the significance of the events they depict. He emphasized the importance of photographs as valuable yet often overlooked sources of information for historical research.

He also read short passages from “The Wright Brothers,” which will be released May 5. 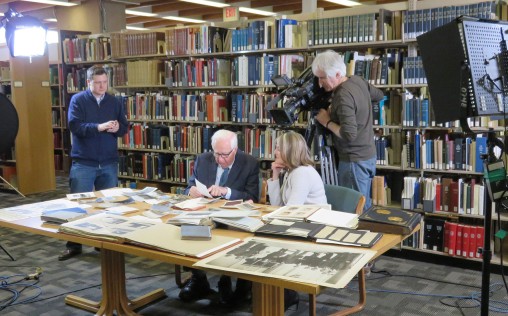 “CBS Sunday Morning” also filmed McCullough at a number of other Wright brothers sites in Dayton and elsewhere for the segment.

Tom Hanks and HBO plan to create a miniseries based on McCullough’s book.

A two-time winner of the Pulitzer Prize, McCullough visited the Special Collections and Archives last fall to conduct research for his book using Wright State’s world-renowned Wright Brothers Collection, one of the most complete collections of Wright material in the world.

McCullough received the Pulitzer Prize for his books “Truman” and “John Adams,” and received National Book Awards for “The Path Between the Seas” and “Mornings on Horseback.” He is also the recipient of the Presidential Medal of Freedom, the nation’s highest civilian award.