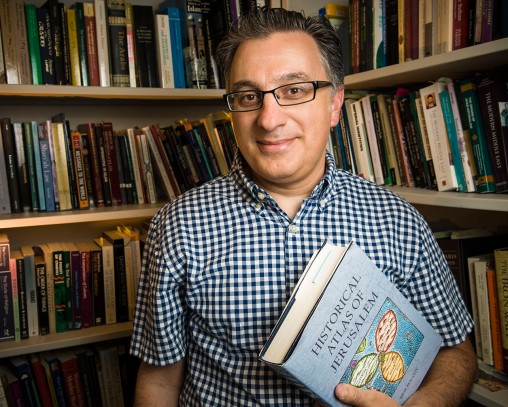 Students interested in learning more about the Middle East and Islam can now do so for college credit with a new minor.

The minor in Middle Eastern and Islamic studies gives students a broad and strong foundation in the history, language, religion, sociology and politics of the Middle East. Classes cover a period beginning in the seventh century, after the rise of Islam, to present day.

The program gives students an understanding of the “complexities over the centuries that have shaped this region,” said Awad Halabi, associate professor of history and religion and coordinator for Middle Eastern and Islamic studies.

“By learning Arabic, by studying Islam, by reading about the history and contemporary politics of this region they gain a fuller understanding of the richness and the diverse makeup of this region today and also over the centuries,” he said.

The minor will appeal to students who are interested in global affairs, history and other cultures, people and religions.

The minor will also help students synthesize and communicate ideas in an articulate and cogent manner, he said.

Autumn Brown enrolled in the minor not only to learn more about the Middle East and Islam, but also to help her work to bring people together.

“I am passionate about bringing down the walls that separate us, conquering misconceptions about the Middle East and Muslims and doing my part to end hate,” she said.

“I have gained quite a bit of knowledge about the language, which has proven to be a barrier of misunderstanding between Arabic speakers and non-Arabic speakers,” she added.

The minor is offered by the Department of History and involves faculty from that department as well as Modern Languages, Political Sciences, Religion and Sociology and Anthropology.

Halabi said the department organized the minor in response to student interest. “I started to see students who have taken a few of my classes and they would tell me they’re also taking Arabic and a class in political science,” he said.

To learn more about the minor in Middle Eastern and Islamic studies, contact Awad Halabi at awad.halabi@wright.edu.