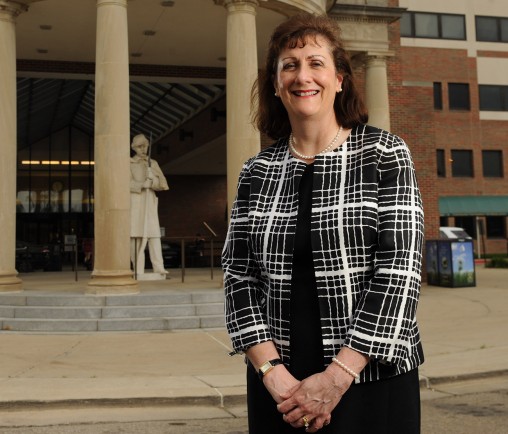 Two-time Wright State grad Anna Monnett serves at Dayton VA and gives back to the College of Nursing and Health.

“Work is love made visible,” she said. “And there really is no better work than this. … There is nobody who gets away without interacting with a nurse. We are critical to the fabric of society. I have a strong interest in making sure there are qualified people coming behind me.”

Monnett’s desire to give back ties into the values she learned at Wright State — community, diversity, service and faithfulness. Monnett has taken the directive to serve seriously.

She has spent her entire career at the Dayton Veterans Affairs Medical Center, where she values its mission-driven purpose.

Monnett is also an active and consistent donor to the College of Nursing and Health. When asked why she chooses to give back to the college she graduated from first in 1983 with her bachelor’s and then in 1987 with her master’s, Monnett’s answer is simple.

“It’s what Wright State did for me,” she said. “I would really encourage everybody to pay it forward and reinvest in the people that are coming behind you.”

In 2004, Monnett was honored as a Distinguished Alumna of the College of Nursing and Health. Last year, Monnet endowed a new scholarship that will help the highly qualified nursing students overcome the challenges of the program.

“You know, in that third year, money gets tight. You’re going to classes, and doing clinicals, and it doesn’t leave much time for working,” she said. “If I could endow a scholarship that could help students get over that hump, then, well, I was going to.”

Monnett started working at the Dayton VA Medical Center right after she graduated with her Bachelor of Science in Nursing. More than 30 years later Monnett is still there, now as chief nurse executive and associate director for patient care services. Over the course of her career, she has witnessed changes both in the medical industry and at Wright State.

“I love that my little school has grown into this regional force,” said Monnett. “I’m proud of my school.”

“When I went to Wright State, I was the first in my family to go college,” she said. “I was impressed by the focus on community health, and the diversity at Wright State was amazing.”

Monnett found herself in classes with students from all walks of life, and the experience has motivated her work at the Dayton Veterans Affairs Medical Center.

“For the first time, I was in class with veterans, with government workers, with nurses returning to school,” she said. “There was a man in my class who drove a truck with straw every day!”

The biggest change Monnett has seen in the health care field is the focus on patient-centered care — an approach Monnett says she has already observed in the students and graduates coming from Wright State to work at the Dayton VA. When she moved into a leadership position, she was soon part of interviewing and hiring Wright State graduates. She has been consistently impressed with the graduates coming from the College of Nursing and Health.

“It’s still about community and diversity and service and faithfulness,” said Monnett, “The important change (in health care) is a movement towards patient-centered care. It’s not just a medical model anymore.”

Monnett’s service has continued in other arenas beyond Wright State. She represents Veterans Integrated Service Network (VISN) 10 on the National Nurse Executive Council and co-chairs the VISN 10 Strategic Planning and Analysis Council, serves on the Regional Nurse Professional Standards Board and is a member of the National SimLearn Steering Committee. She also serves on the Academic and Strategic Planning Board at the College of Nursing and Health, as well as an advisory board member for the Department of Nursing at Miami University.