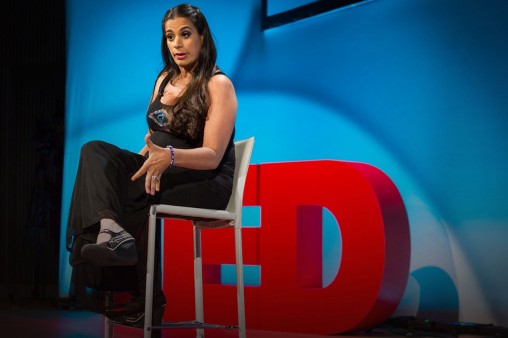 Maysoon Zayid will lecture at 7 p.m. on March 22 in the Student Union Apollo Room.

Zayid’s lecture, “I Got 99 Problems and Palsy Is Just One,” begins at 7 p.m. on Tuesday, March 22, in the Student Union Apollo Room.

It will be preceded by a public reception at 5:30 p.m. in the Student Union Pathfinder Lounge. Both events are free and open to the public. Tickets are not required.

Zayid’s talk is part of both the Honors Institute and the Presidential Lecture Series and is co-sponsored by the Office of Disability Services.

Laura Osseck, an attorney specializing in disability rights, will give the Honors Institute’s luncheon address on Wednesday, March 23, at 12:30 p.m. in the Student Union Apollo Room. Osseck will discuss “Disability Rights in Ohio: Community Integration and Voting Rights.”

The luncheon is free and open to the public, but registration is required. Register on the Honors Institute website.

This year’s Presidential Lecture Series and Honors Institute celebrates the 25th anniversary of the Americans with Disabilities Act of 1990.

Zayid is the co-founder and co-executive producer of the New York Arab American Comedy Festival and has been a contributor to “Countdown with Keith Olbermann” and “The Daily Beast.”

She has performed standup comedy in top New York clubs and has toured extensively at home and abroad. She was a headliner on the Arabs Gone Wild Comedy Tour and The Muslims Are Coming Tour. Zayid has appeared on Comedy Central, PBS, CNN, HBO, ABC and BBC and had a feature role in Adam Sandler’s “You Don’t Mess With the Zohan.” Her screenplay “LAW” was chosen for the Sundance Middle Eastern Screenwriters Lab.

She also founded Maysoon’s Kids, an education and wellness program for disabled and wounded refugee children. In 2013, she was an honoree of United Cerebral Palsy of NYC’s Women Who Care Awards and currently sits on the planning committee.

She received her B.F.A. in acting from Arizona State University.

Laura Osseck is an attorney at Disability Rights Ohio, the state’s protection and advocacy system for people with disabilities. Previously, she was an AmeriCorps attorney at Legal Aid of Western Ohio, where her practice focused on homelessness prevention.

Osseck represents individuals in various aspects of disability law with a focus on community integration. She has also represented children and parents in several special education cases. Currently, she is part of a team of attorneys representing students with disabilities in statewide class action litigation involving Ohio’s provision of free appropriate public education under the federal Individuals with Disabilities Education Improvement Act.

She has presented on many topics affecting people with disabilities, including voting rights, housing and special education.

Osseck received her law degree from Case Western Reserve University School of Law and is admitted to practice law in the U.S. District Court for both the Southern and Northern Districts of Ohio, the U.S. Court of Appeals for the 6th Circuit and Oregon.

The 2016 Honors Institute is supported by The New York Times inEducation program and Wright State’s Office of the President, with additional support from Wright State’s First Year Programs in University College, the Office of Disability Services and the Honor Society of Phi Kappa Phi.

Now in its 11th year, the Honors Institute regularly brings to campus well-known speakers with important stories to share. In recent years, the institute has sponsored talks by Apple co-founder Steve Wozniak; Neil deGrasse Tyson, director of the Hayden Planetarium at the American Museum of Natural History; physicist and author Michio Kaku; and deep-sea explorer Robert Ballard, who discovered the sunken Titanic.

More information on the Honors Institute is available at wright.edu/honors/honors-institute.