A heart for service 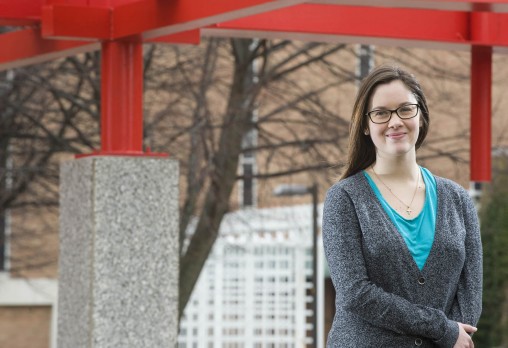 Wright State marketing major Holley Mapel keeps a busy college schedule and active lifestyle, getting involved on and off campus. (Photos by Will Jones)

Aside from working as a supplemental instruction leader, landing on the Dean’s list, serving on multiple organizational boards and competing in a speech contest, Mapel has had a heart for building community in most everything she has done since she was young.

“Even in soccer in high school, I tried to put an aspect of community into it,” she said. “I was a Girl Scout in first grade. I just love serving and giving back. I’ve always had this sense of community in whatever I’m involved in.”

Mapel said the tragic death of a high school friend in a car accident changed her perspective on life. She has since devoted much of her time to helping or advocating for others in need.

“It made me realize life isn’t guaranteed and is why it’s important to touch as many lives as possible while we’re here,” she said.

As a lifelong Licking County resident, Mapel grew up in Newark, Ohio, where she has left many footprints.

As a freshman in high school, Mapel was elected to the Youth Leadership Council after completing a rigorous and competitive interview process. She participated for three years, serving as co-chair, treasurer and eventually president during her senior year. She was recognized for being the first high school student in Ohio to be a full member of a nonprofit board. She was also elected class officer, varsity captain for the soccer team and played basketball, all the while earning a place in honor society.

“I have to remind people I’m not Superwoman,” Mapel said. “It takes a lot of dedication. It can be really draining at times, but with perseverance there’s reward at the end. I’ve seen what’s been accomplished through the different things I’m involved with. That gives me the motivation to continue to work hard.”

When determining which college to attend, Mapel took several online quizzes that matched her to potential universities that fit her preferences. Since Wright State was a consistent result, Mapel decided to visit and was attracted to the Raj Soin College of Business and the size of the campus.

“I loved the campus,” she said. “It was big enough for opportunities but small enough to have community. I really think it’s an underrated college. I’m glad the debate is coming here to show just how great the campus really is.”

Both of her parents earned civil engineering degrees from The Ohio State University. Mapel, who has two older brothers, gained a competitive spirit in sports, grades and the number of social media followers.

“We’re all three extremely different, yet all three are very competitive and independent,” Mapel said. “They strive me to be better because it’s competition. They bring out the adventurous side of me and encourage me to push through.” 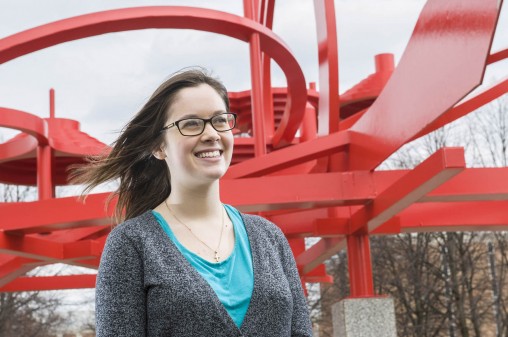 After college, Holley Mapel wants to pursue a career in public relations within the nonprofit sector.

At Wright State, Mapel has managed to participate in nine intramural sports and enjoys the Outdoor Resource Center’s climbing wall. Mapel said she does not like staying at home and loves the adrenaline rush she gets from being active and being outside. Outside of campus, she has skied in 11 states and has been snowmobiling, whitewater rafting and zip lining, some of which she completed during mission trips in Costa Rica. She also attended the Women’s World Cup in the summer of 2015 in Montreal.

She also attends Wright State’s Cru, formally known as Campus Crusade for Christ, is the ambassador of the Association of Fundraising for Professionals and is pursuing a certificate in Non-Profit Leadership Alliance.

Additionally, she interns as a marketing and communication assistant, managing social media for St. Vincent de Paul District Council of Dayton, a nonprofit organization serving thousands of homeless individuals in the Miami Valley.

She has also been nominated for National Collegiate Scholar and is running for assistant speaker of the house in next year’s Student Government elections.

Mapel’s sense of community and passion for serving the needy fits her interest in pursuing a career in public relations within the nonprofit sector.

“I’ve always had a heart for serving and have loved the idea of bringing a community together and creating change for the better,” she said. “I think it’s important to build an internal community so the organization can build an external community.”

Despite all these activities, Mapel is taking 16 credit hours while maintaining a 4.0 GPA. She recognizes the importance of prioritizing her involvements and how busyness affects her life, including her faith.

Being busy allows her “to see the posture of where my heart is,” she said. “I’m extremely involved in serving and leading and I have to stop and think, ‘am I doing this just to do this, or am I doing this as an act of worship and using the gifts God has given me?’”

Mapel tries to apply being a “servant leader” in all that she does. A quote that she considers is to “think globally and act locally.”