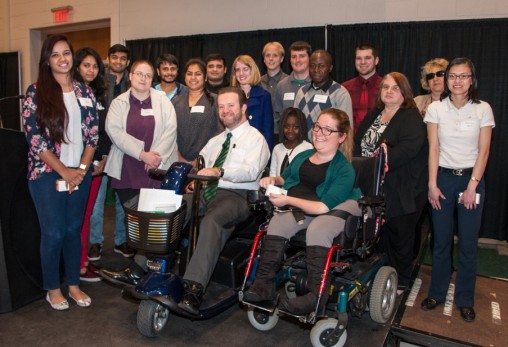 The Office of Disability Services recognized graduating students, student employees and faculty and staff during its annual Scholarship and Graduation Reception.

A sense of accomplishment filled the air at the seventh annual Scholarship and Graduation Reception hosted by the Office of Disability Services (ODS).

More than 30 scholarship recipients and 35 graduating students were recognized April 12 in the Student Union Apollo Room. Attendance was the highest in the event’s history.

For many students, the evening was special as they were recognized for overcoming obstacles or for graduating.

“I’m really grateful there’s people out there that provide support, and to the ODS, who allows me to show my intellectuality despite my disability,” said Holley Mapel, a freshman marketing major who received a scholarship.

Kip Mangira, a management information systems major, said he’s received a scholarship through ODS every year so far. “It’s truly a blessing to know there’s donors who care out there. … I know it’s not cheap. It makes me excited to go out and join the workforce,” he said.

Robert Sabwami, a rehabilitation services major who is visually impaired, helped other visually impaired individuals while he lived in Kenya. “It’s about how to adapt to the world,” said Sabwami. “Not every part of the world has accessibility taken care of. In such situations you have to learn to adapt and not have excuses.”

The Office of Disability Services announced the creation of a new $5,000 scholarship, established by the parents of M. Patrick Daniels, a 2000 Wright State graduate who died in 2011.

The office also recognized staff, faculty and local businesses who have been instrumental in assisting Wright State community members who have disabilities, with a Golden Spoke Award.

Wright State’s Computing and Telecommunications Services (CaTS) was honored for its continual speedy service repairing computers ODS makes available for testing, along with responding to other technological needs.

Darin Russell, transportation operations supervisor in the Office of Parking and Transportation, was recognized for going above and beyond his assigned jobs duties to call students with disabilities to remind them that their accessible ride is on the way, helping them meet the bus on time. One student said she would most likely not be able to attend college without Russell’s service.

The Fairborn Holiday Inn was also honored for having easy accessibility and being accommodating to people with physical disabilities.

Brittany Poston, a senior rehabilitation services major, said ODS staff and faculty met her needs while she attended Wright State. “A lot of them have been there for me, like Donna Harris and Heather Rando,” she said. “I can always talk to them when I need someone.”

The Office of Disability Services also announced its collaboration with the College of Education and Human Services will soon result in the launch of a Disability Studies minor program. More information will be announced as details are finalized.

In addition to the scholarship and graduate recognition, the ceremony also featured a presentation by ODS’s Ohio STEM Ability Alliance, a program started at Wright State that targets students with disabilities pursuing a degree in a STEM-related field.