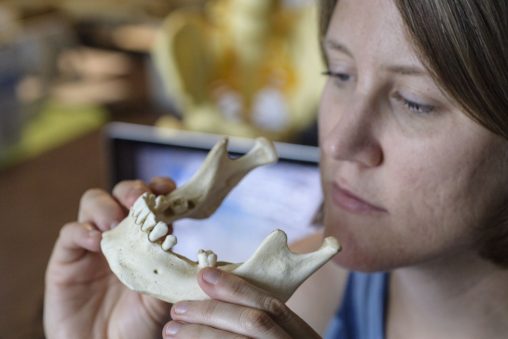 Wright State anthropologist Amelia Hubbard specializes in the study of past life ways through teeth. (Photos by Will Jones)

The child of two scientists, she grew up in the U.S. Virgin Islands, fascinated with the natural world, but never thinking that teeth would be her life’s work.

The cultural history of the Caribbean is still visible on St. Croix, the small island where Hubbard was raised. From old sugar mills and Danish colonial buildings to prehistoric shell middens, reminders of the island’s history remain throughout St. Croix.

“When I was a kid, I’d wander around the neighborhood with my friend. I lived on a long dirt road and after a good rain, you’d see an old hinge from a door, horseshoe or a piece of pottery,” said Hubbard, an assistant professor in the Department of Sociology and Anthropology. “I was always surrounded by history, and I thought it was fascinating.”

Recently, Hubbard discovered a story she wrote in the fifth grade describing her interests in being an archaeologist. As she grew older she read books about Egyptian archaeology and even tried to learn how to read hieroglyphs.

With archaeology in mind, she attended Beloit College.

“I signed up for my first course of the semester, Intro to Archaeology, and it was the worst course I’ve ever taken,” she said. “I had this deep sinking feeling like, ‘what am I going to do now?’”

She was willing to give her major another chance, taking a class in cultural anthropology that ended with her research being presented at a national conference. With a renewed passion for the subject, she enrolled in other anthropology courses, eventually studying abroad in Tanzania and later traveling to Kenya after graduation as part of a research team from The Field Museum in Chicago.

Today, Hubbard describes herself as a specialist in bioarchaeology (the study of past life ways) as a dental anthropologist (through teeth). But her interest in these fields didn’t develop until she read a book written by a professor at The Ohio State University, where she later received her master’s and doctorate degrees in anthropology.

Hubbard credits her love of teeth to her graduate adviser and dental anthropologist, Debbie Guatelli-Steinberg.

“I didn’t intend to study teeth when I began at Ohio State,” Hubbard said. “I actually thought there wasn’t much to learn from them. After a class with Debbie I realized that teeth are not only more abundant than bones in the archaeological record, but they also contain a wealth of information about the human experience.”

Hubbard’s current research looks at what ancient DNA and tooth features can tell about the movements and interactions between past peoples. Much of this research challenges old ways of approaching such studies, which she notes doesn’t always make her popular.

“No one wants to hear that the way we’ve been doing our research for the past several hundred years might need some significant revision,” she said. “Though a lot of people think genetic information is better than dental information, the reality is that ancient DNA doesn’t preserve forever. It ‘decays’ over time, leading to fragments of the original picture, especially in humid conditions like those found in Kenya.” 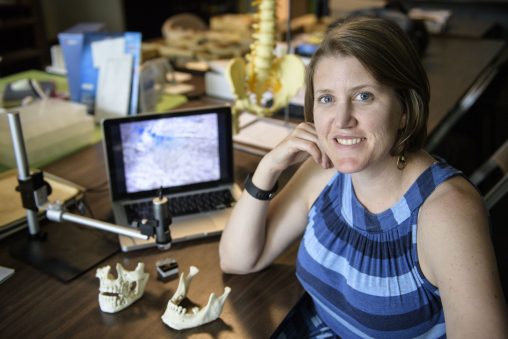 Amelia Hubbard’s current research looks at what ancient DNA and tooth features can tell about the movements and interactions between past peoples.

Some of her work with DNA from living descendants of the skeletal populations she studies also found that mitochondrial DNA, a type of DNA that passed through female lineages and often used in ancient DNA analyses, provides less information than teeth about their histories.

“I work with an anthropological geneticist at another university. He analyzed the mitochondrial DNA in my sample and compared it to DNA I analyzed that is a ‘mix’ of both parents’ DNA,” Hubbard said. “Surprisingly, the DNA from both parents could detect some differences between populations, but the DNA from ‘mom’ painted a picture that doesn’t match the histories collected. My colleague looks at migration from Yemen and Oman to East Africa for trade — he thinks the mitochondrial DNA might be telling something about migration out of East Africa by females for domestic jobs on the Arabian Peninsula, which continues today.”

Though Hubbard’s work is focused on past peoples, she enjoys working with living descendant communities.

“I always think deeply about what my research means to the people I am studying. I try to involve them as much as possible,” she said. “Even though I study dead people, I think about living people a lot.”

In addition to her work in East Africa, Hubbard is completing two projects with colleagues at sites in Poland. The first project looks at infant teeth recovered at a medieval site believed to contain “vampires.”

In medieval Poland, the period in which the teeth were dated, suspected vampires were buried with rocks to weigh their bodies down, sickles at their necks or coins in their mouths. Though Hubbard has not yet been able to complete an analysis of the baby teeth, she is working on a related project from a nearby cemetery with anthropology major Joshua Keeton.

“Josh and I are looking at the health of populations in this rural community compared to the neighboring city,” she said. “In short, there are tooth markers that indicate these adults were not healthy as kids. … But they are tall, suggesting that they ‘caught up’ on their growth later in life. A colleague in Italy is studying a site from the same time period and finding the opposite — healthy kids that are abnormally short adults. We’re trying to find out why these two sites have different patterns of growth.”

The scientific community at Wright State has been a positive community for Hubbard.

“At Wright State I see a lot of impactful, significant research taking place, but it’s not a place where people are competing by pushing other people’s research down,” she said. “When I first arrived on campus, I needed access to particular equipment not available in my college. Coming from a large research university I was used to waiting a long time, up to a year, for some equipment. Faculty, especially colleagues in biological sciences and neuroscience, sent out calls on campus and as far as the University of Dayton to locate what I needed. I am lucky to have these colleagues.”