Wright State Theatre production of ‘9 to 5: The Musical’ runs March 16 to April 2 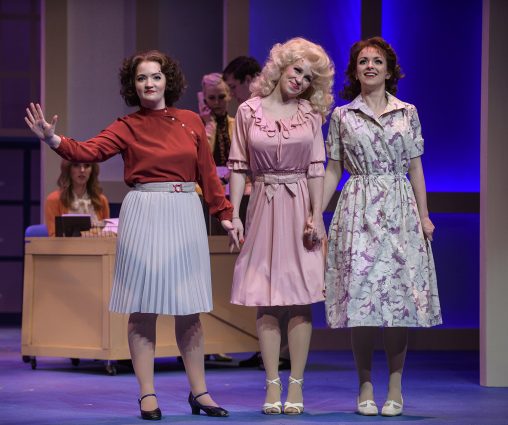 “9 to 5: The Musical,” based on the 1980 movie of the same name, opens March 16 in the Festival Playhouse in the Creative Arts Center. (Photos by Erin Pence)

Wright State University Theatre continues its 42nd season in the Festival Playhouse with the comedy “9 to 5: The Musical,” running March 16 to April 2.

“9 to 5: The Musical” is based on the 1980 movie of the same name, with music and lyrics by Dolly Parton. It features a book by Patricia Resnick, based on the screenplay by Resnick and Colin Higgins. The musical premiered in Los Angeles in September 2008 and opened on Broadway in April 2009. It received 15 Drama Desk Award nominations and four Tony Awards nominations.

“9 to 5” is directed by Greg Hellems (“Hot Mikado,” “Oklahoma!”), with musical direction by Scot Woolley (“No, No, Nanette,” “The Music Man”). Musical numbers are choreographed by Wright State alumna Megan Wean Sears. Sets are designed by Wright State alumnus Michael S. Brewer, lighting by Jessica Drayton (“No, No, Nanette,” “A Streetcar Named Desire”), costumes by Emily Sollinger (“A Streetcar Named Desire,” “Sondheim on Sondheim”), properties by John Lavarnway, and sound by Alex Koker.