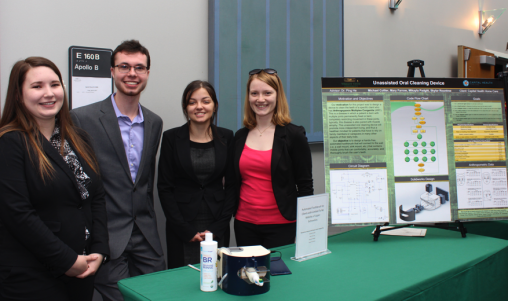 Ping He, professor of biomedical engineering, advised the students with the project, which took place over two courses during the fall and spring semesters.

The idea came from Padgitt’s mother’s best friend, who is a caregiver for a child with Arthrogryposis Multiplex Congenita, a disorder that immobilizes joints. Eventually, the students hope to give the completed device to the child.

Farrow said the team split the work across two semesters. The students spent the fall semester brainstorming, as well as figuring out the coding and necessary circuitry. They worked on building the device during the spring semester.

The team planned to have plenty of extra time, but 3D printing the casing for the motors and circuitry posed a problem. One of the companies they considered using wanted to charge them $2,500 to print. With a budget of $700, that was out of the question.

Because of the delay in the printing process, the students received their printed casing less than a week before the preliminary judging. The night before their project was due, the team pulled an all-nighter.

“Our chemistry is what brought us this far, 100 percent,” Rountree said.

Collier agreed. “We never started fighting in the first place, so when push really got to shove, instead of going from a little bit of fighting to attacking each other, we went from no fighting to frayed nerves,” he said.

After the preliminary judging of the project, the team qualified for the Senior Design Showcase — a gathering of best projects from the preliminary round — organized by the College of Engineering and Computer Science. Eight entries were in the showcase.

Padgitt said she felt like her team won because their project combined 3D printing, circuitry, coding and mechanics.

“From the way I’ve always seen it, we’re the hybrid engineer,” Collier said. “We can do some of everything and this project was very much that. We did pretty much everything that you do in engineering. Coming out of the project, I can say ‘yeah, I’m an engineer.’”