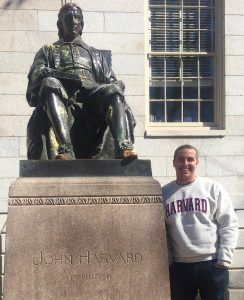 Lukas Wenrick, who graduated from Wright State in April with a degree in social science education, will attend the Harvard Graduate School of Education.

Lukas Wenrick is headed to Harvard. The former Student Government president, social science education major and 2017 Wright State University graduate has been admitted into the Harvard Graduate School of Education, where he will pursue a Master of Education in Higher Education.

Because Harvard’s master’s program is fast-paced at only nine months long, Wenrick said that the program does not often accept students directly from undergraduate programs. At most, he said, one to three undergraduate students are accepted. However, because of recommendations from the Wright State community, Wenrick made it into the program.

“I was jumping for joy when I received my letter of admittance over spring break. This is a truly a life-changing opportunity that I will cherish every moment of,” he said.

Wenrick’s search for a graduate school began in 2016 when he contacted Wayne Stark, the director of workforce development in the Center for Liberal Art Student Success in the College of Liberal Arts. Stark helped Wenrick through the process of applying for graduate school, as well as assisting him in studying for the Graduate Record Examination test.

“As the first in my family to attend a traditional graduate school, this process was extremely difficult and confusing, but Wayne made it painless,” Wenrick said. 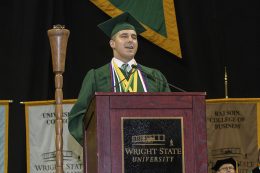 Lukas Wenrick addressing the class of 2017 during the university’s commencement ceremony on April 29.

He said that working with people like the university president, provost, chief financial officer and members of the Board of Trustees and the Faculty Senate gave him a glimpse of what he wants to do in the future.

“It opened doors that I never thought possible. It was an incredible experience,” he said.

Going to Harvard, Wenrick said, has been a dream of his for a long time. Because of the leadership skills he acquired through Wright State, he said he is looking forward to being a leader among his peers at Harvard just like he was at Wright State.

As an honors student at Wright State, Wenrick said, working with Susan Carrafiello, the director of the University Honors Program, helped him through his college experience.

“Wright State gave me every opportunity I could have ever imagined,” he said. “I can’t thank Susan Carrafiello and the entire program enough for their help in preparing me academically for the road ahead.”