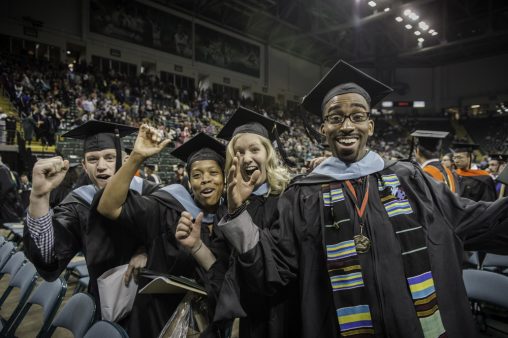 This year, Wright State celebrates its 50th anniversary as an independent public university, culminating with a special Homecoming celebration Sept. 29 through Oct. 1.

The 2010s were years of excellence for Wright State, highlighted by the appointment of Cheryl B. Schrader as president; the dedication of the Tom Hanks Center for Motion Pictures; opening of new buildings; and the successful Rise. Shine. fundraising campaign.

Wright State’s Friendship Food Pantry opened in 2011 to provide emergency food and referrals to students in times of need, helping them to stay in school and meet their educational goal. The pantry also assists faculty, staff and community members in need of emergency food and referrals in order to relieve food insecurities and their underlying causes in the Dayton community.

In 2012, Wright State changed from a quarter-based calendar to a semester-based calendar, encouraging revisions of curriculum and enabling students to spend more time studying the subjects in their classes.

Groundbreaking for the Neuroscience Engineering Collaboration Building occurred in 2013. The building, which opened two years later, helps to create a unique synergy between biomedical research and engineering that has few parallels in the nation. 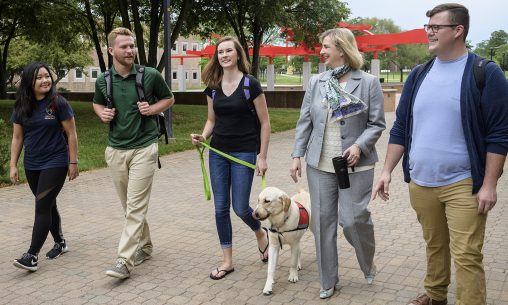 Cheryl B. Schrader joined the university in July 2017 as Wright State’s seventh president.

The Veteran and Military Center (VMC) opened in 2014, to provide a space where veteran and military students could not only get the support they need to process their benefits but also relax and study. The VMC partnered with public radio station WYSO to create “Veterans’ Voices,” a series of stories on local veterans’ experiences transitioning to civilian life.

The Student Success Center, which features high-tech, active-learning classrooms, writing and math support labs and a rain garden, opened in 2015. The building features oceans of open study space, including broad-shouldered hallways and corners populated with whiteboards as well as comfortable chairs and benches.

Tom Hanks visited campus to dedicate the Tom Hanks Center for Motion Pictures in 2016. He gave a speech to the Wright State community detailing what he would like to see happen in the center.

Not only did liberal arts students have a new building in which to pursue film, they also received a remodeled Creative Arts Center to pursue their passions. New studios for art, dance and music students, an art gallery and a spectacular new entrance were among the changes made to the center.

Cheryl B. Schrader joined the university in July 2017 as Wright State’s seventh president. She immediately placed the university on firmer financial footing and reorganized financial and budget functions for increased efficiency and effectiveness. Prior to joining Wright State, Schrader served as the chancellor of Missouri University of Science and Technology from 2012 to 2017.