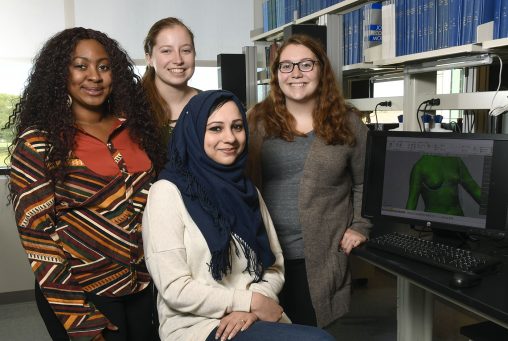 Nearly 80 percent of women wear the wrong bra size, often causing pain in the back and core, as well as a consistent feeling of discomfort.

“Instead of just doing a research paper, he suggested we do research ourselves on the mechanics of bra materials to try and see if we can create an idea that will benefit the science community,” Bailey said of Goswami.

There are many different aspects to the project, such as analyzing breast tissue, reviewing patents of bra designs and learning about different materials used to produce bras. Robinson is researching tissue and Bailey is in charge of researching materials.

Both Robinson and Bailey are excited to be part of research that they hope could make an impact on the way bras are created and manufactured.

“We’re trying to model a better bra,” Bailey said. “So many women have pain and we want to know why.”

Hamandi said a significant problem for sizing bras is the fact that female bodies are not often symmetrical in size. As a result, a bra may fit on one side or be too tight or too loose on the other.

Another common problem is an underwire. Bailey said that an underwire can affect a woman’s skin by putting too much pressure on too little an area. To fix this, the group is experimenting with different types of metal, as well as 3D printing an underwire.

They hope to recruit 100 women for a study. They will give each woman a survey and take measurements using a 3D scanner.

Robinson said that working on this research allows her to use what she’s learned in class in a real-world scenario.

“We’re taking what we know about statics analysis and physics, biomechanics and things like that, being able to use it for something super meaningful, that’s kind of a rare chance,” she said.

Participate in the study by emailing brg@wright.edu.