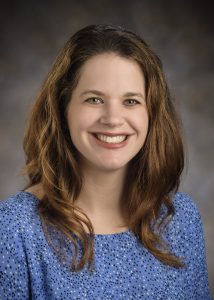 Amanda Spencer has received the 2018 President’s Award for Excellence in Leadership for her efforts to centralize University Academic Advising.

As Wright State’s first director of university academic advising, Spencer was tasked with delivering a campus-wide academic advising program to better facilitate student academic success, retention and timely academic progress. With a goal to centralize advising by Jan. 1, 2018, she was able to succeed in only four months’ time. She accomplished much of the foundational work while continuing to still serve in her previous role as assistant director of advising in the Raj Soin College of Business. At the same time, Spencer was also leading university committees, including the Unclassified Staff Advisory Council and Staff Council.

Prior to centralization, undergraduate academic advising was individually supervised within each college. To unify advising, Spencer worked with each of the seven advising units to create effective, proactive and comprehensive advising plans, while also considering the differing needs of each college.

“Not only was she able to hire, establish and build this team, she was also able to lead this team in streamlining processes and procedures across the university to better serve the students, faculty and staff of the colleges and the university as a whole,” Littell said.

Part of this process included establishing a shared identity for the newly organized unit and collaboratively developing a strategic vision. Spencer demonstrated leadership through strong communication and partnerships with her team of 35 professional and administrative staff, along with colleagues across campus, including university administrators.

“She leads them with diligence and tireless energy, all with a laser-focus on student success, and always with her trademark smile and energetic spirit,” Littell said.

JoAnn Bevelhymer, director of enrollment management in the Raj Soin College of Business, said Spencer is a tremendous asset to Wright State. When Bevelhymer hired Spencer, she was impressed by her expansive skill set and leadership capabilities.

“Amanda is the perfect person to lead the centralization of the University Academic Advising,” Bevelhymer said. “She has created and encouraged a harmonious climate among the diverse group of assistant directors and advisors working under her.”

Bevelhymer commended Spencer for her tireless work ethic and her dedication to enhancing the academic advising program.

“She contributed to the mission and goals of the college, formed collaborative relationships with other departments on campus and lent her expertise to university committees,” Bevelhymer said.