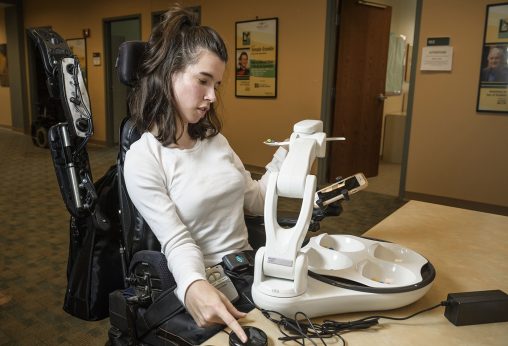 Sarah Faith Davis, a freshman communication major, demonstrates Obi, a robotic dining device now available to students with disabilities in the Marketplace and The Hangar. (Video by Kris Sproles / Photos by Erin Pence)

Wright State University has partnered with a local technology company to further its accessibility for students with physical disabilities.

The university has added three Obi dining robots to its services, which are designed, developed and manufactured by DESiN LLC in downtown Dayton. The addition of these robots was funded by a $15,000 grant provided by the Christopher and Dana Reeve Foundation. The university is the only known institution to provide dining service robots to its students.

Obi is a robotic device that assists individuals who have difficulty feeding themselves independently. The device uses manipulator technology at a scale, price and level of usability that has never existed before in assistive technology. The primary market for the device is for home-care, both internationally and domestically. Other markets include hospitals, nursing homes, rehab centers and daycares.

Obi is being sold domestically and internationally in 16 countries, retailing for $5,950. In June, the Obi Robot was named a gold winner in the Rehabilitation and Assistive-Technology Products Category at the 20th annual Medical Design Excellence Awards competition.

“Our goal is to maximize the awe factor through a device that is as simple to use as possible. We like to think of the ideal product as a magic wand; super powerful, magical and incredibly simple,” DESiN CEO and Co-founder Jon Dekar said. “We’re very excited about making a difference.”

This marks the second grant the university has received from the Reeve Foundation. In 2013, Wright State received funding for adaptive rec equipment, including special wheelchairs used for basketball.

The university’s addition of these dining robots furthers its reputation of being a national leader in accessibility. In March, Wright State was named one of the best colleges for students with disabilities, ranking No. 3 on College Magazine’s Top 10 Campuses for Students with Physical Disabilities. The magazine noted several of the university’s initiatives, including its on-campus service dog park, dorm assistance and equipment offerings and paratransit services.