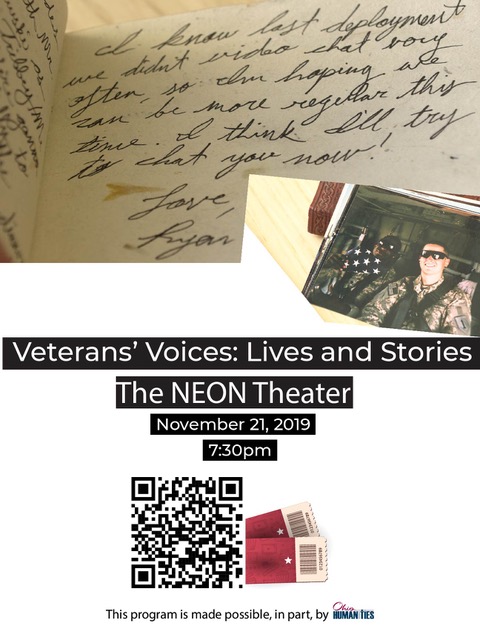 The documentary and webisodes, “Veterans Voices: Lives and Stories,” feature Wright State student-veterans as well as veterans from the community and their families, exploring their time in the service and lives as civilians.

The project is a partnership between Wright State’s New Media Incubator and Veteran and Military Center and involves numerous students who appear on the screen and behind the camera. It is led by the co-directors of the New Media Incubator, Ashley Hall, assistant professor in the Department of English Language and Literatures, and Jen Ware, associate professor of communication, and Seth Gordon, director of the Veteran and Military Center.

“Veterans Voices: Lives and Stories” will premiere on Nov. 21 at 7:30 p.m. at the Neon in downtown Dayton. Tickets for the screening are free and are available on the Veterans Voices Facebook page.

The producers are premiering a webisode every Friday for six weeks leading up to the screening. Every Friday at 4 p.m. a new webisode is streamed on the Veterans Voices YouTube channel and screened at the Wright State New Media Incubator, which hosts a discussion after the screening.

Each webisode is 10 to 15 minutes and is shared socially to reach a wide audience. Past webisodes can be viewed at bit.ly/vv-digital-premieres.

“We hope people will watch it, enjoy it, think about it and then want to see the full documentary at the Neon on the 21st,” Ware said.

The project launched with the digital premiere of “Letters Home” on Oct. 4. Other webisodes are “Veteran Spouse,” which focuses on veterans’ family life; Integrity First,” which explores service by LGBTQ members of the armed services before, during and after Don’t Ask Don’t Tell; “Vetrepreneur,” about veterans who have launched start-ups; “We Hire Vets,” about businesses that commit to hiring veterans; and “I’m a Veteran,” a retrospective featuring reflections from project participants.

“Each of these segments isn’t an end to the story,” Ware said. “There are always more stories to be told and there’s always more to say and some good ground for conversation.”

“It just so happens that one of the best ways to assist veterans in connecting with each other is through story,” Gordon said. “Telling stories can also be therapeutic because it connects veterans to one and other. Collaborating with the New Media Incubator — a group with storytelling expertise — has expanded the range of who can hear veteran stories and the quality with which we tell those stories. We are delighted with the outcome.”

The Veteran and Military Center launched the Veterans Voices Project as a way to connect Wright State student veterans with local veterans by interviewing them about their military service. Stories are sent to the Library of Congress, archived on Wright State’s CORE Scholar and shared on the project’s Facebook page and YouTube channel. The project has also included a series of stories produced by and featuring Wright State student-veterans on WYSO Public Radio.

“Veterans Voices: Lives and Stories” expands on those efforts with thematically organized stories from multiple perspectives and multiple experiences of veterans at Wright State and in the local community.

Numerous Wright State students have helped produce the digital segments and documentary by interviewing veterans and others who appear in the films, recording and editing the interviews, creating social media posts and coordinating logistics and production issues.

“It’s a really nice variety of people to make sure that no one person is in any one spot the whole time and they have different experiences,” Ware said.

Ethan Young, who majors in English, specializing in professional and technical writing, and interns in the New Media Incubator, has served as a senior production team member on the project. Young, who did not know many veterans before joining the project, said it’s been rewarding to hear their perspectives and stories. As an editor on “Veterans Voices: Lives and Stories,” Young said he has enjoyed the challenge of creating a cohesive story out of all the rich material that has been collected.

“It’s been fun to work on this project and look at the stories people have and create a story out of that to share,” he said.

Hall and Ware say that “Veterans Voices: Lives and Stories” is a great example of two different areas at Wright State collaborating on the common goal of helping others learn something.

“I have learned so much and I’m just really grateful for those who have participated for being willing to share their stories and being willing to help others understand what their experiences are,” Hall said.