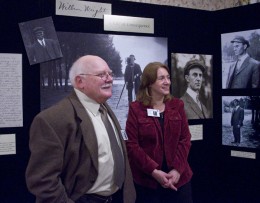 Tom D. Crouch, Ph.D., and Dawne Dewey with a display about Wilbur Wright.

Heritage groups in the Dayton region next year will celebrate the life of Wilbur Wright, who invented the airplane in Dayton with his brother Orville before his untimely death 100 years ago in May.

Special events now in the planning stages will include an exhibit of original artifacts, documents and pictures prepared by graduate students at Wright State University, which is named for the Wright brothers.

Dawne Dewey, head of Wright State Libraries’ Special Collections and Archives, previewed the exhibit with a display of pictures and documents from the archives Saturday evening at Aviation Trail Inc.’s annual Celebration of Powered Flight dinner. Saturday was the 108th anniversary of the Wright brothers’ first powered flights at Kitty Hawk, N. C.

Wilbur died at the age of 45 on May 30, 1912, after an illness diagnosed as typhoid fever. His death brought to an end an extraordinary partnership that had changed the world.

He lived “a short life, full of consequences,” Dewey said, quoting a diary entry Wilbur’s father, the Bishop Milton Wright, wrote on the evening of his death.

She said those words inspired Dayton-area heritage groups to plan special events and exhibits next year to celebrate Wilbur’s accomplishments.

“A group of graduate students in our Master of Public History Program is creating an exhibit along with the National Park Service, Dayton History and other partners to do an exhibition that will concentrate on Wilbur as an individual,” Dewey said.

“Who was he? What kind of character did he have? It will talk about his honesty, his dedication, his perseverance, his inventive spirit, and yes, even his humor,” she said.

Wilbur looks thoughtful and sometimes brooding in most of his pictures, but Dewey recounted a mock lawsuit he wrote against his younger brother in the early 1890s when they were partners in a printing business.

Painstakingly typewritten and freighted with legal verbiage, the claims against Orville include sticking Wilbur with too much of the business and insulting him by making him do “girls work” in the shop. It asks a fictitious court for money, an apology from Orville and an order “requesting him to keep his mouth shut in future lest he should again be guilty of befouling the spotless and innocent character of others.”

Wilbur and Orville worked as one in their quest for flight, but “without Wilbur Wright, I’m absolutely convinced, they would not have invented the airplane,” said Tom D. Crouch, Ph.D., senior curator of aeronautics at the National Air and Space Museum in Washington, D.C.

It was Wilbur who initiated and led the brothers’ early studies and experiments, said Crouch, a Wright history authority who emceed Saturday’s program. He described Wilbur as an incredible intellect, a gifted writer and speaker, and a man who also cared deeply about his family and watched over his younger brother.

Crouch, who works closely with Dewey on matters of aviation heritage, said the exhibits planned for next year will give the public a new appreciation for Wilbur as a person.

“While the Wright brothers were a genuine partnership, when it came to Wilbur Wright, indeed there was none like him,” he said.

Tom D. Crouch, Ph.D., and Dawne Dewey with a display about Wilbur Wright.

The iconic image of the first powered flight with Orville Wright at the controls and Wilbur by the wing.

Wilbur Wright prepares to fly his sister Katharine in Pau, France, in 1909.

Wilbur and Orville Wright on the porch of their home at 7 Hawthorne Street in Dayton.

A photo of Wilbur Wright.