Electronics executive Don Myers, ’83, has a knack for helping turn smaller companies into big kids on the block. 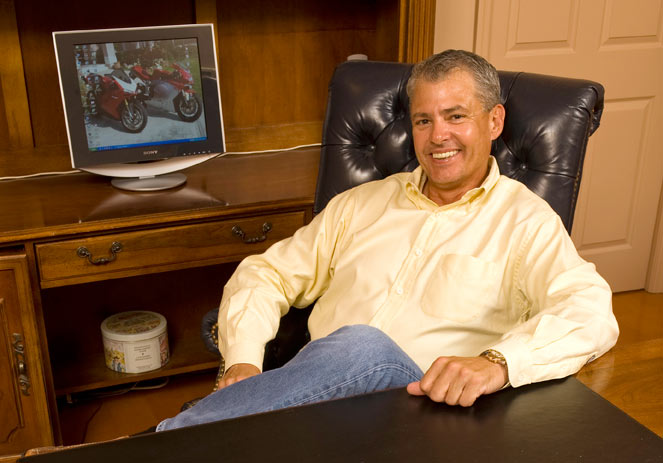 Don Myers, senior vice president of corporate development for Florida-based Jabil Circuit, Inc., stretches out in his other office, the one in his home. Myers graduated from Wright State in 1983.

For a guy who prefers working for smaller companies, Don Myers has a problem. He helps turn them into big ones—really big ones.

Today, the 51-year-old Myers is senior vice president of corporate development for the Florida-based Jabil Circuit Inc., a global electronics manufacturing giant that had $12.7 billion in sales in 2009.

The Wright State University alumnus now swims with the big fish in the world of mergers and acquisitions. And he enjoys the fruits of his success, collecting both motorcycles and fine wines.

But it really doesn’t seem all that long ago that Myers was laid off from his $7-an-hour-job at the former Frigidaire plant in Dayton, Ohio, and spent more time partying with his buddies than building his future.

“I woke up one morning after nine months and said, ‘This is going to kill me. I can’t keep doing this,’” Myers recalled.

So Myers enrolled at Sinclair Community College, got his associate degree, and then in 1981 transferred to Wright State. He majored in marketing and worked as a proofreader in the university’s word-processing department.

“By then I had gotten serious about school,” he said. “At Wright State, I ended up doing really well.”

However, when Myers graduated in 1983 times were tough and jobs were scarce. So he followed his father to Huntsville, Ala., and got a job with SCI Systems, which makes electronics products for the computer, aerospace, telecommunications, medical and banking industries.

Within six months, Myers got promoted and was running the company’s largest account. However, he was only making about half the salary of many of his colleagues.

So to double his pay, he moved across town and took a job with Avex Electronics, going from an established company doing $500 million a year in revenue to a new one making only $175 million.

At Avex, Myers was part of a company that worked on defense-related business and helped develop one of the first car phones outsourced to a U.S.-based manufacturer. Three years later, Avex was doing $500 million in annual revenue.

But even though the company was having a lot of success, Myers still wasn’t happy.

“The culture in the company had changed as we grew,” Myers said. “I really wanted to get back into a small-company environment.”

Myers recalled meeting some guys at a trade show a few years earlier who worked for Jabil. The company had fewer than 500 employees and about $140 million a year in annual revenue. Jabil was looking for someone with industry experience to help find new business.

So Myers hopped on board.

“Early on, it was hard not to have some successes because the electronics outsourcing industry was growing so fast,” he said.

The culture at Jabil was unique.

Employees would mark the end of what was usually a grueling work week with “Beer 30,” a reference to the 4:30 p.m. time on Friday when they would stream out of the office to an adjacent lake. Coolers built into the docks were stocked with beer by the the company.

“It was fun. We worked hard, and we played hard,” Myers said.

Today, Jabil operates plants all over the world, has recently added capacity in India and China, and pumps out products around the clock. The company has diversified, expanding from telecommunications to include consumer electronics and products in the medical, defense and aerospace industries.

“It’s tougher now because competition has increased,“ Myers said. “We’ve just kind of stayed ahead of it by having a robust strategic planning process, reacting quickly to the changing environment, and reshaping our business when necessary.”

“Probably the toughest thing right now is that we’re in a macro-economic environment where there are limited investment dollars,” he said. “It costs a lot of money to go out and buy companies. Working in this environment we need to do everything we can to reduce risk and assure that the investments we are making have the best chance to maximize returns for our shareholders.”

To escape the stresses of high finance, Myers loses himself in the unlikely combination of collecting fine wines and chrome horses.

“I have a bad motorcycle habit,” he says with a chuckle. “I own four.”

Myers credits Wright State with kick-starting his career by exposing him to the working world through group projects.

“But more than anything, it helped me grow up,” he said of Wright State. “It taught me discipline at a time that I really needed it.”