Watch the trailer for True Nature, the new thriller film by Wright State alumni Patrick Steele and Ann Rotolante. True Nature was filmed in the Dayton region with local actors and supplies. 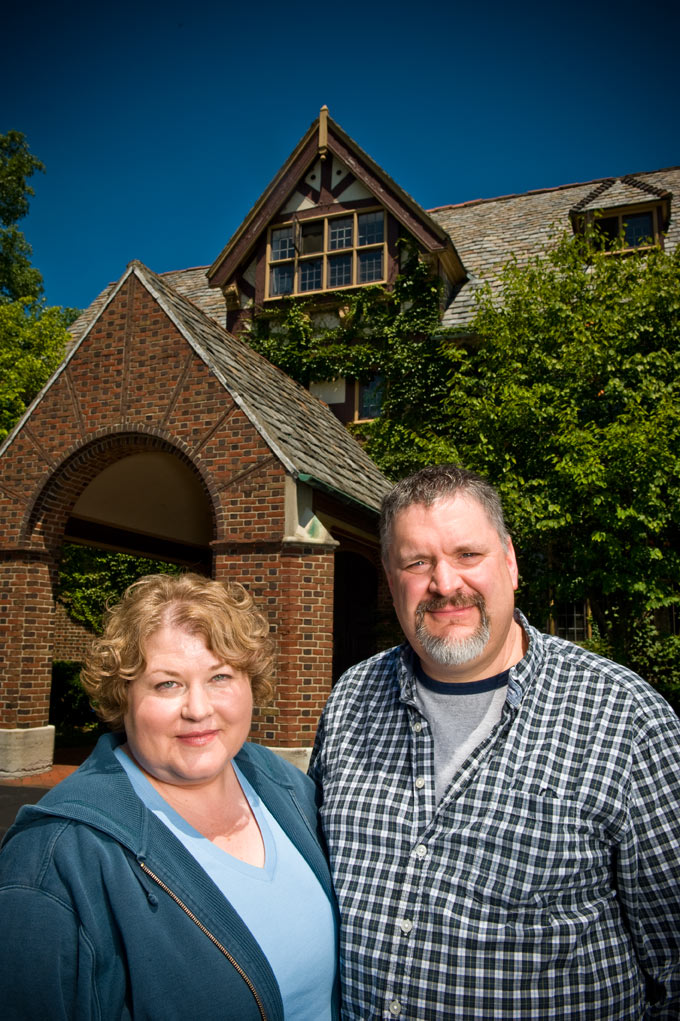 Ann Rotolante and Patrick Steele at Hook Estate in Dayton, where the majority of True Nature was shot.

A young woman, missing for more than a year, mysteriously returns with no recollection of where she’s been. Her wealthy family welcomes her home with open arms. Haunted by violent visions, she begins to suspect that her father is hiding dark secrets and that her disappearance is linked to his sordid business dealings. As the fragile web of lies unravels, she fears that her own life and sanity may be the price for discovering the truth.

This chilling story is the plotline of True Nature, a new film from Wright State University motion picture graduates Patrick Steele and Ann Rotolante. A gripping combination of family drama and supernatural thriller, True Nature questions the heavy price one family pays for their American dream.

“I wanted to comment on how the drive for success and material gain blind us to the things that really matter and how we carry the burden of guilt for our actions,” said Steele, who wrote and directed the film. “The American dream is a great notion, but what is one really willing to do to attain it?”

Steele graduated from Wright State in 1997 with a B.F.A. in motion picture production. He has taught courses at the university as an adjunct professor. Rotolante graduated with the same degree in 2009 after coming back to school as a non-traditional student to pursue her passion for movies.

Both filmmakers have experience in the industry. Rotolante worked with Julia Reichert and Steven Bognar on the Emmy Award–winning A Lion in the House and the Academy Award–nominated The Last Truck: Closing of a GM Plant. Steele worked as a film preservationist for the Library of Congress for 10 years and made four award-winning short films, all of which have screened at international and domestic film festivals.

After Rotolante produced Steele’s A Toss of the Coin, the pair decided to collaborate on a longer venture. In 2004, they began to develop a full-length script. Filming began in 2007.

“We were at a point in our evolution as filmmakers where the next logical step was to do a feature film,” said Steele. Over the next three years, Steele wrote the film in his spare time, bouncing ideas off of Rotolante, who edited and produced the film.

Strong advocates of grassroots independent filmmaking in the Dayton area, they decided to make the entire movie in the Miami Valley. Most of the film’s supplies were bought locally and most of the actors are from the midwest. Even the background music was sourced from Ohio-based musicians.

“Our intention from moment one was always to do something local,” said Rotolante.

The majority of the film was shot at Hook Estate, the family home of co-producer Beth Duke. The 26-room, Tudor Revival mansion became a character itself, according to Rotolante. Other Dayton-area locations included Kettering Tower, Square One Salon, the Schuster Center parking lot, and the former Pacchia restaurant in the Oregon District.

“Having the university here is a big asset. Wright State has an award-winning motion pictures program and that is a huge talent base to draw from. There are lots of students eager to learn and get experience,” said Rotolante.

Steele and Rotolante used their Wright State connections to their advantage. More than 50 members of True Nature’s cast and crew were Wright State students, alumni, or professors. Class of 2002 acting graduate Marianne Porter plays the lead role of Marianne, the girl whose disappearance and subsequent reappearance drives the film. Directors of Photography Evan Nesbitt and Marco Fargnoli graduated in 1989 and 1994, respectively, both with a B.F.A. in motion picture production.

“Involving people who have a connection to this area makes it more than just another gig,” said Steele. “It becomes a labor of love for everyone.”

Steele attributes much of his success to the motion pictures program at Wright State.

“They emphasize the importance of being a total filmmaker,” he said. “Here, I was able to nurture my talents and ultimately flourish because of the individualized attention and the small community that we have, one that’s very dedicated to young filmmakers.”

True Nature also stars Carolyn McCormick of the Law and Order television franchise. The film had a private sneak preview screening this past spring at the FilmDayton Festival to positive reviews. The next step for Steele and Rotolante is to submit the film to other festivals, both in the United States and abroad. They are also in early negotiations with a well-respected sales company that will help True Nature find worldwide distribution.

“I just think the world of Ann and Patrick,” said Julia Reichert, a Wright State film professor and award-winning filmmaker. “They are wonderful people and they’ve made an excellent film. It’s a real testament to what we can do here in Ohio.”

“I’m very proud of it,” said Steele. “It’s a film that takes the audience on a serious ride.”