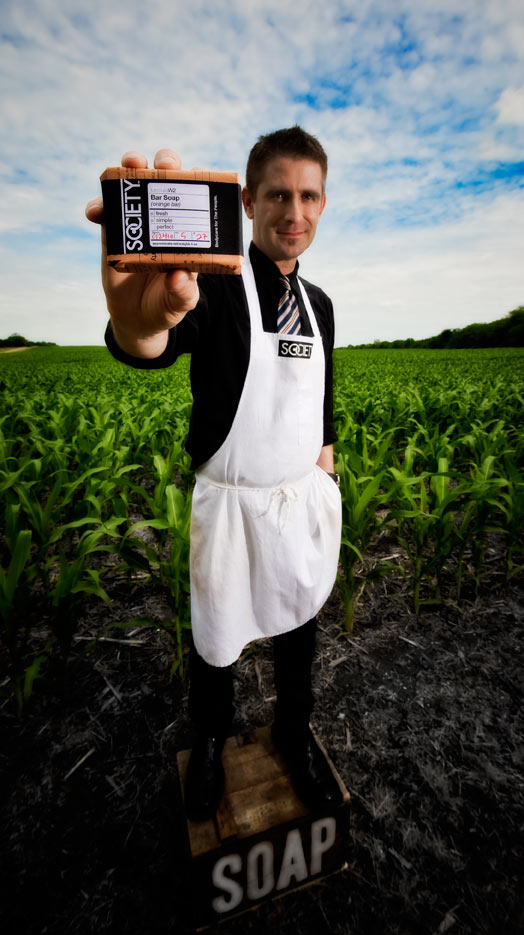 When his job was put on the chopping block, graphic designer Stephen Rumbaugh considered his options for the future. He’d always wanted to pursue his master’s degree, and he now could do so full time—if he had a steady stream of income. Rumbaugh thought back to a book he read in the early ’90s on soap making and sensed an opportunity.

“I’ve always liked things that are a little different, unique. Growing up, I used to hate the grocery store soap in our house,” recalled Rumbaugh. So the experiment began. He enrolled in the Master of Humanities program at Wright State University and tried to offset his costs through his new homemade soaps, which he dubbed Society Bodycare: Bodycare for The People.

The inspiration behind the name came as Rumbaugh was walking through the Fashion Show Mall in Las Vegas. “It suddenly occurred to me that all levels of society need soap—that and food, right?” he joked.

Deciding to use his 2009 tax return on all the necessary equipment, Rumbaugh headed to a public library to research what would be needed. The library was about to throw away a stack of unused 1040 tax forms, when he had another “a-ha!” moment. He would package his soap bars with recyclable items that people use as members of society—from old tax forms to phone book pages—and finish them off with his own label design. With the name, equipment, and packaging all accounted for, he just needed to make his product.

The first batch was a self-proclaimed disaster. “It’s not like making cookies,” he quipped. “A lot of trouble goes into making a batch of soap. All the elements have to be aligned properly.” He found his niche in making all-vegan soaps that, with the exception of lye, are made from edible ingredients, like oils and herbs.

From his Yellow Springs, Ohio, home, Rumbaugh brews not only a steady line of income, but also the foundation for his master’s project. Inspired by his participation in a service-learning class at Wright State, Rumbaugh met with Wright State associate professor Jennifer Subban and assistant professors Erin Flanagan and Sarah Twill about developing a humanitarian angle for his product.

With the success of his product line, he wanted to find a way to give back to the greater good.

Twill noted during their brainstorming that people who qualify to receive food stamps are unable to use those for personal hygiene products. “The social need for these items is just tremendous,” said Twill. “I mentioned that some of the soaps could go to homeless shelters, domestic violence programs, food pantries, and after-school programs that assist youth from low-income families. The possibilities are endless.” Twill, Flanagan, and Subban are now serving as Rumbaugh’s master’s project advisors.

Rumbaugh cuts bar-sized chunks from a fresh loaf of soap in his kitchen.

“I’m very excited about the potential of helping others through my soaps,” said Rumbaugh, who expects to complete his master’s degree at the close of 2010. “I wasn’t sure if this was even going to work, but it’s actually been very successful, especially around Christmas. I’ve been able to pay for much of my tuition and books through the income it’s generated. It’s hard though, because my focus needs to remain on my education, so I can’t dedicate as much time and energy as I would like to on Society Bodycare. I hope to be able to devote more time to it as I really develop my master’s project.”

Over the next six months, Rumbaugh looks to add more-distinctive labels to each of his soap “flavors,” exploring a color-coded system for the bar wraps. “I think that will make it more user friendly, and make the different soaps really stand out,” he explained.

Visit the photo gallery to see how Stephen Rumbaugh makes his distinctive soaps.