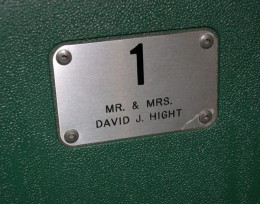 David Hight and his wife were original premium seat holders at the Wright State Nutter Center, but had to give the seats up when he moved to Detroit, Michigan to work for General Motors.

When Wright State traveled Thursday to Hinkle Fieldhouse in Indianapolis to play the Butler Bulldogs, the team had busloads of Raiders on the road with them, and thousands more watching on ESPNU.

Following the Raiders from afar has become commonplace for fans, who’ve also been watching the Horizon League Network coverage on the Internet when the games aren’t on television.

The Raider fan who probably has the long-distance record for watching Wright State through the years is David Hight.

“I was one of the original premium seat holders in the Nutter Center, but had to give that up when I moved to Detroit,” said Hight, who graduated in 1977 with a bachelor’s in accounting.

Hight has traveled the world since taking a job with GM Finance, and he’s watched the Raiders in virtually every country he’s visited during basketball season.

“The first country was Thailand in the middle of the night,” said Hight. “Sometimes I’ve had to scrounge. Uzbekistan was a little bit of a struggle.”

“The Internet service has been better in some of the countries I’ve been in than the U.S.,” said Hight.

When he’s stateside, Hight loves coming back to the Wright State Nutter Center, like this year when he brought his family to the Butler game. But Hight also adores watching the Raiders on the road, and meeting other fans like him.

“The fans seem like your best friends; on the road games you see some hard-core fans, the fans are very open and friendly,” said Hight.

Few are probably as hard-core as Hight, who’s made it a priority to stay connected to his team when he’s traveling abroad.

“The only problem is losing sleep and trying to work around my work schedule,” said Hight.

You can bet come tournament time, Hight will be sitting diligently in front of a computer watching his Raiders, no matter where his seat actually is in the world.