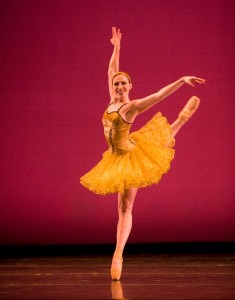 This year’s concert will feature a number of special performances, including four world premiere works choreographed by Wright State faculty, a world premiere piece by up-and-coming choreographer Susie Payne and a work by world-renowned choreographer Adam Hougland. Students will be joined by dancers from the Dayton Ballet II company and the Dayton Contemporary Dance Company II.

The Winter Dance Concert will include:

Risk of Flight, choreographed by Adam Hougland
Hougland is one of Dance Magazine‘s “25 to watch in 2011.” He currently serves as resident choreographer for the Cincinnati Ballet and the Louisville Ballet. He has won the Princess Grace Award for Choreography, the Choo-San Goh Award for Choreography, and the New York State Council for the Arts Commissioning Grant. Hougland was also one of Point Magazine‘s “10 VIPs of 2006.”

Shake, choreographed by Susie Payne
This world premiere piece is designed to get the audience moving. Payne earned her Bachelor of Fine Arts degree from Wright State before dancing with the Dayton Contemporary Dance Company. She now performs with the Deeply Rooted Dance Theatre in Chicago. This year, Payne has choreographed with the Dayton Ballet and with B.F.A. students at Wright State.

A Corps of Individuals, choreographed by Justin Gibbs
“This piece is about breaking out of the corps de ballet,” said Gibbs, Wright State assistant professor of dance. “I was always frustrated as a dancer when the people who worked hard and were good at corps work got stuck in the corps, while the people who were bad at it or just didn’t care got to be soloists.”

The Re-Player, choreographed by Justin Gibbs
“What if the girl of your dreams was actually someone you played a long time ago?” said Gibbs. “What if you could rewind it all and do it again?”

Psychology of Letting Go, choreographed by Gina Walther
This premiere work by Wright State assistant professor of dance Gina Walther is inspired by the idea of moving on and forward. Original music by Nina Simone and Dayton musician Kevin Anderson gives the piece a modern, jazz style.

Excerpts from Bernstein’s Mass, choreographed by Gina Walther
This is your first chance to see three excerpts from the Dayton premiere of Bernstein’s most complex and original creation. The performance is part of a groundbreaking creative collaboration between the Dayton Philharmonic Orchestra and the Wright State University’s theatre, dance and music departments.