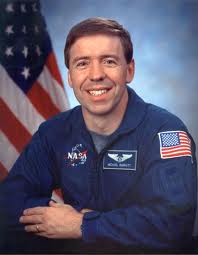 A 1991 graduate of the Wright State University Boonshoft School of Medicine Aerospace Medicine Residency Program, Michael Barrett is on his second voyage into space.

Discovery touched down, just before noon at the Kennedy Space Center in Florida.

On Monday, Discovery undocked from the international space station, wrapping up a nine-day visit. Astronauts left behind a new and improved storage center, supplies and humanoid robot.

It was the last flight for Discovery which is set to be retired and placed in a museum.

Discovery retires having logged more than 148 million miles in orbit during 39 flights. It spent 365 days in space during its lifetime.

In March 2009, Barratt lifted off from the Baikonur Cosmodrome in Kazakhstan aboard a Russian Soyuz TMA-14 spacecraft bound for the International Space Station (ISS). As a flight engineer for ISS Expeditions 19 and 20, Barratt remained on the station for nearly six months.

Unlike many astronauts, Barratt hadn’t cherished the thought of space travel as a lifelong dream. A passion for science led him to earn a B.S. in zoology from the University of Washington, where he met and married his wife, Michelle. The couple would eventually settle in Houston and have five children, but first they moved to Chicago, where both enrolled in medical school. After earning his M.D. from Northwestern University, Barratt became an internal medicine resident at Northwestern before serving as chief resident at Veterans Affairs Lakeside Hospital.

Toward the end of his time in Chicago, Barratt’s conversations with the Aerospace Medicine Residency Program director at Wright State, “really got me hooked on the whole space medicine thing,” he said. “It’s just the most interesting thing I can think of. It’s brand-new physiology. It’s research. It’s operational. It’s amazing.”

While a resident with the program, Barratt conducted research on human performance through underwater testing of a new concept for an EVA (Extra-Vehicular Activity) enclosure.

“For not being at NASA at the time,” Barratt said, “I had an incredible capability, between Wright State and Wright-Patterson Air Force Base, to study this, and the data was useful at JSC (Johnson Space Center) as well.

“That’s one of the great things about Wright State. People are used to doing that kind of stuff, and with Wright-Patterson there, they’re all about optimizing human performance in strange environments like flight environments, so it was not that difficult to do.”

“The academic background that I got at Wright State was a huge thing,” Barratt added. “That just makes a big difference.”

From Dayton to Moscow via Houston

After completing his aerospace medicine residency, Barratt worked for NASA at the JSC in Houston on the Space Station Freedom project. Two years later, in 1993, he became one of the first Americans to attend the landing of a Soyuz spacecraft, and he spent the next several years supporting the new joint U.S./Russian Shuttle-Mir project.

Barratt considers his involvement in bringing together the two space programs “one of the most exciting things I’ve ever done.”

“Space medicine is kind of a small field anyway,” he said. “Then, all of a sudden, we got this new set of colleagues that we didn’t have access to at all before. So the community more than doubled in size. That was just an incredible pleasure.”

A long countdown to liftoff

Barratt’s work with the Shuttle-Mir program inspired him to give the idea of becoming an astronaut a little more thought, again driven by an abiding fascination with the medical aspects of spaceflight.

To live and work on a space station, Barratt said, “you’re looking at full adaptation to zero-G. If you look at the big scheme of human spaceflight, we want to go to Mars, and we want to go a lot further, and it’s going to involve a long period in zero gravity. It’s essentially how we’re going to get somewhere outside of low Earth orbit.”

Even as he considered this new path, Barratt served as medical operations lead for the ISS from 1995 to 1998.  He then acted as lead crew surgeon for the first expedition crew until he was selected, along with 16 other candidates, as a member of the NASA Astronaut Class of 2000.

After beginning his astronaut training, Barratt would have to wait nearly nine years for his first chance to travel into space.

A bright future for spaceflight and humanity

Taking the long view has also helped Barratt to take the inevitable challenges in stride—including the occasional global crisis, such as the current economic turmoil. After all, he points out, the field of space exploration has weathered worse difficulties over the years.

When he arrived in Russia in 1993, Barratt said, “there was no food on the shelves, and my colleagues hadn’t been paid for months. It was like that for quite a while, for at least a couple of years. These guys went for months at a time just kind of living on home-grown produce and the barter system, and yet they kept their space station afloat. It was the pride, and it was just their lives. It was the right thing to do.

“A couple of weeks after I left here once” during those early years, he added, “there were tanks on the bridge over the Moscow River, shelling the White House (a Russian government building). We built that whole [Shuttle-Mir] program in circumstances much, much worse  than now.”

The space program will and should remain a priority, Barratt also feels, because “it is an international program with an incredibly positive agenda.”

In terms of the full scope of human history, he added, “expanding off the planet, that’s an absolute eventuality.

Economic crises and political events might delay things or accelerate things by a few years here and there, but in the big scheme of things, they’re really tiny blips on a great big curve.

“I have no doubt we’ll be going [back] to the moon and further,” Barratt said, “and it’s just a matter of when.”