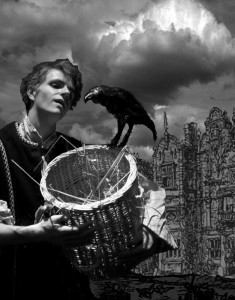 The world premiere of Bruce Cromer's adapation of Charles Dickens' "Barnaby Rudge: Part I" will play for one weekend only.

Fourteen actors will play over 30 characters this weekend as the Wright State theatre department presents the world premiere of Barnaby Rudge: Part I, an adaptation of Charles Dickens’ classic novel.

Set in and around 18th century London, Barnaby Rudge tells the story of a simple-minded young man and his mother who are endangered by a mysterious stranger. An unsolved murder from the past pulls four young lovers from four families into a plot of deception, danger and desire.

Bruce Cromer adapted the novel for the stage and will direct the production himself.

Cromer, a professor of acting and movement, is the department’s area coordinator of acting. He is also a resident artist with the Human Race Theatre Company, a fight choreography expert and a certified teacher with the Society of American Fight Directors.

The Herbst is a small, black-box theatre located in Wright State’s Creative Arts Center. The venue offers audiences an intimate theatrical experience without the distractions of large crowds or elaborate stage décor.

Tickets are $7 for students and $10 for adults. They go on sale 90 minutes prior to each performance at the Theatre Box Office. Seating in the Herbst is limited, so patrons are encouraged to arrive early.

Look for the world premiere of Barnaby Rudge: Part II on the Herbst stage in June 2012!