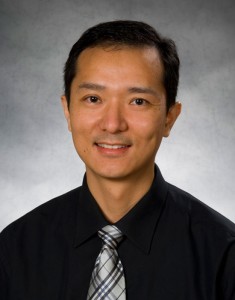 A Wright State University scientist’s quest to learn nature’s most mysterious secrets of flight has earned him a prestigious National Science Foundation award.

The groundbreaking work has potential application in the development of insect-size aircraft for the military, but it’s also aimed at making tools used in advanced engineering studies more accessible to biologists and other researchers for education and research.

The NSF describes the CAREER awards as among its most prestigious. It awards them to boost the careers of junior faculty who combine excellent research with teaching.

Dong is only the third Wright State faculty member to receive the award, according to Jack A. Bantle, Ph.D., vice president of research and graduate studies.

Dong said the award is an important endorsement of the work he has done over the last five years at Wright State and a sign of growing recognition of the quality of Wright State’s research and education programs in top scientific circles. 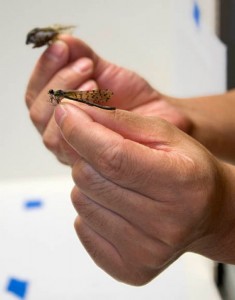 What has set Dong’s work apart is the ability to capture the wing flapping of freely flying animals, especially insects such as dragonflies and damselflies.

It also gives five years of stable funding to Dong’s Flow Simulation Research Group, which has used high-speed cameras and powerful computer animation and modeling software to reveal the exquisite wing flexing and flapping of free-flying insects, and the intricate air currents they create to generate lift.

Dong said the prestige the CAREER award brings and the stable funding will help him draw top student talent to Wright State and keep student researchers who are already here.

He also expects the award to help him leverage additional grants to expand on the program he outlined in his CAREER proposal. To date, much of his funding has come from the Air Force, which is striving to develop bird- and insect-size micro air vehicles for dangerous or sensitive missions.

Research like Dong’s is important because the aerodynamics of big, fast airplanes don’t work for very small wings and low speeds. “If you scaled a Boeing 737 down to this size it would not easily fly,” Dong said.

What has set Dong’s work apart is the ability to capture the wing flapping of freely flying animals, especially insects such as dragonflies and damselflies. Previous research typically tethered insects by gluing them to sticks or tying them by strings, he said.

“But this would change their behavior. And what they are doing is actually trying to get rid of the restraint,” he said.

His students have come up with various methods to coax the insects to fly. “It’s difficult, but still, it’s doable,” he said. The proof is a collection of nearly 500 video clips of insects taking off, hovering, turning and cruising, he said.

Three high-speed cameras mounted at right angles and focused on a small zone capture the flying motions. A laser triggers the cameras when an insect moves within the zone. The insects’ wings are dotted with grid patterns, which allow computer programs to convert their motions into 3D animations.

These techniques already have revealed new knowledge about how insects’ wings work. For example, Dong said, the research has shown that Dragonfly wings don’t move like stiff plates as most research work assumed, but flex significantly as they flap.

Computer modeling and simulation technology creates visual representations of the air currents, or vortices, the flapping generates. It has revealed that each type of small bird and insect creates distinctly different vortex patterns. The CAREER grant will allow Dong’s group to do comparative studies aimed at finding out why they differ, whether one is the most efficient, and ultimately advance the development of a comprehensive theory of aerodynamics for small flying creatures.

Beyond the research itself, Dong’s project will help make the advanced engineering tools his group uses, including some of its own design, available to biologists and other researchers worldwide for education and research.

Dong’s work has drawn interest from engineers and biologists around the world. He said his CAREER grant proposal drew 21 letters of support from across the United States and abroad. The results of his research have been published internationally in professional journals and the press, including a Discover magazine article in 2010.

Dong earned his Ph.D. at UCLA in 2002 and came to Wright State in 2006. He received a university Faculty Award for Excellence in 2010. The award noted he had secured more than $500,000 in outside funding for research and was the only faculty member in 2010 in this area to receive two awards under the Air Force Research Laboratory-Dayton Area Graduate Studies Institute student-faculty fellowship program.

The CAREER award also shows Wright State is a good place to advance a research career, Dong said. “People outside are talking more and more about the good work from Wright State. We are educating people and doing very high quality research.”

For his own work, Dong said Ohio is a great place to study insect flight. The state of Ohio and Wright State University have given strong support to his research, Dong said. And, in Ohio’s warm summer months, “We can easily find tons of dragonflies in the parking lot.”