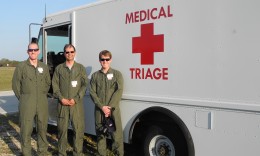 Wright State University aerospace medicine residents got a rare opportunity to participate in the medical launch support for the STS-133 Space Shuttle mission at the Kennedy Space Center.

Magnetically stuck to the file cabinet above Farhad Sahiar’s head is a blue-and-white badge that reads: “WPAFB Honorary Commander.”

The badge given to the man who heads Wright State’s Aerospace Medicine Residency Program signifies how the ties between the university’s program and Wright-Patterson Air Force Base are expanding and flourishing under BRAC.

The honor was recently bestowed on Sahiar by Col. Amanda Gladney, installation commander at Wright-Patterson, on behalf of the 88th Aerospace Medical Squadron.

“This will strengthen our relationship,” said Sahiar, M.D. “And as the years progress, we anticipate much more growth in our Master of Science aerospace medicine program because of the BRAC move.”

Wright State Boonshoft School of Medicine’s NASA-funded Aerospace Medicine Residency Program, established in 1978, promotes the health and well-being of pilots, astronauts and other air and space travelers. It is the oldest civilian aerospace medicine training program in the United States, having graduated more than 100 physicians and attracted students from over 25 foreign countries.

Wright State is partnering with Wright-Patterson in many medical, human performance and other projects affected by Base Realignment and Closure-directed consolidation.  And Wright-Patterson is currently in the final stages of receiving an influx of programs and personnel as a result of BRAC.

Earlier this month, officials at Wright-Patterson presided at a formal opening ceremony for the Human Performance Wing. The $239 million, 10-building complex is home to the relocated Air Force School of Aerospace Medicine and its research, medical training and epidemiological analysis functions, as well as the 711th Human Performance Wing.

And the Air Force’s research to develop radar that can better resist enemy jamming and operate effectively in the presence of other radar and commercial transmitters is getting a big boost from Wright State students and graduates as part of the BRAC realignment.

A series of other recent BRAC-related developments have also bolstered Wright State’s aerospace-medical ties to Wright-Patterson.

Under an agreement with the Air Force, residents in Wright State’s aerospace medicine program will be able to take part in training activities at the base. And starting July 1, Sahiar will begin training three Air Force colonels in the Wright State program.

“We will be sharing a lot more in terms of interacting with the base, the training program, their clinic, research facilities,” Sahiar said. “And they will be voluntary faculty members with our division and will be supervising our residents during their rotations at Wright-Patterson. We are happy to have them aboard.”

Wright State residents will also be able to take advantage of state-of-the-art equipment flowing into Wright-Patterson as a result of the BRAC move. The equipment includes a human centrifuge that will replace the one decommissioned in 2007. “This will be one of the most sophisticated centrifuges in the world,” Sahiar said.

There will also be new and relocated equipment for training and research into high-altitude flight and spatial disorientation. And there will be two full-sized training simulators of aeromedical transport aircraft.

“This is basically a whole fuselage of an aircraft with all kinds of medical equipment that is used in transporting critical passengers,” Sahiar said. “They actually have several courses for physicians who participate in aeromedical evacuations. Our residents will be participating in those courses as well.”

With the uptick in aerospace medicine activities in one location, Sahiar also anticipates increased interest from foreign physicians.

“I see us attracting some doctors from outside the United States more than we do now,” he said.

The delegates have asked to visit the departments at Wright State that support spatial disorientation and aerospace medicine research. Also planned is a meeting with Sahiar and Jennie Gallimore, Ph.D., director, Ohio Center of Excellence for Human-Centered Innovation.