Wright State wins UAV contract of up to $5 million 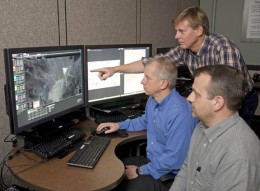 The U.S. Air Force has awarded a contract of up to $5 million over five years to Wright State University for research related to unmanned aerial vehicles.

Wright State will do the work through the Wright State Research Institute, with faculty from the Ohio Center of Excellence in Human Centered Innovation, and several corporate members of the Human Performance Consortium, including Science Applications International Corp. (SAIC), Aptima Inc., SelectTech Services Corp., and Applied Research Associates Inc (ARA).

Last December, Wright State announced the award of two other human-performance contracts worth up to $6.4 million. Together with the latest award, they help make the consortium a one-stop shop of experts, equipment and facilities to help the Air Force achieve its human-performance objectives.

“This latest award signals the Air Force’s growing reliance on the resources and expertise of  Wright State and its partners,” said Wright State President David R. Hopkins. “The university is honored and prepared to help advance and strengthen the nation’s defense capability.”

The wins validate the collaborative approach the Wright State Research Institute has taken in forming and leading the consortium as a way to retain Air Force research dollars that often flow through Wright-Patterson to contractors outside the Dayton region.

“By bringing the best and brightest together regardless of organizational affiliation, we have been able to deliver tremendous value to AFRL and accelerate their research,” said S. Narayanan, Ph.D., executive director of the Wright State Research Institute and dean of Wright State’s College of Engineering and Computer Science. “We’ve proven the success of this model twice before and now we’ve been asked to do the same for research challenges related to human-centered control of remotely piloted aircraft.”

The latest contract will develop ways to help a single operator to manage numbers of semi-autonomous, remotely piloted aircraft–also known as unmanned aerial vehicles, or UAVs.

Military needs for UAVs have surged in recent years, resulting in systems that are sophisticated but labor intensive. Air Force officials say a single Predator UAV requires 160 people to support its operations–a ratio the Air Force won’t be able to sustain as its UAV fleet swells.

This research supports an Air Force goal to allow one human operator to control more than one UAV. The Air Force envisions turning human operators into supervisors of, or perhaps even teammates of, highly automated UAVs. But this will require significant advances in technology to support human interaction with machines.

The first funding increment of the new contract is $700,000. But it will leverage another $750,000 in state funds approved under the Ohio Third Frontier program for capital expenses, including facilities and lab equipment.

The other two contracts are closely related to this work but also have applications across the spectrum of human performance issues, from improving workplace performance to countering terrorism threats.