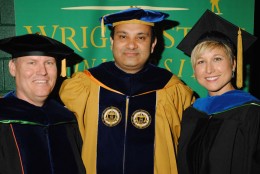 Whether they’re developing more effective UAVs for the battlefield or better underwater vehicles for exploration, Wright State University engineering Ph.D. students have been helping to forge new technologies since 1998.

On Thursday, September 29, the College of Engineering and Computer Science celebrated the first 100 engineering Ph.D. graduates. It’s a program that in many ways was designed to complement the AFRL (Air Force Research Laboratory) at Wright-Patterson Air Force Base and the growing needs of businesses in the Dayton region.

“It was hard to imagine a strong engineering program without a strong graduate program, especially sitting next to a world-renowned research organization such as AFRL,” said James Brandeberry, founding dean of the College of Engineering and Computer Science.

“The business community also made a strong case to the governor about the need for engineers with advanced training to support the region’s economic development.”

Garrison Walters, the former vice-chancellor of the Ohio Board of Regents and current executive director of the South Carolina Education Commission, was integral to the creation of the program that currently has 125 students. Walters will make a special trip back to Ohio to celebrate the milestone.

“Much of the success of the program can be credited to key figures like Dr. Walters and James Brandeberry for identifying a need and pushing hard for a collaborative program that could work hand-in-hand with the AFRL,” said Program Director Ramana Grandhi. “Many of our students come from AFRL, and many of our graduates are employed there.” 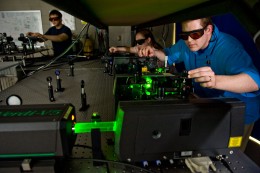 A student in the engineering physics lab at Wright State University.

In fact, program leaders can boast that more than 50 percent of the graduates are employed in Ohio and 30 of the first 100 graduates currently work for the AFRL in defense-related jobs.

“It is immensely satisfying to see WSU Engineering Ph.D. graduates being successful as professors in various academic institutions, research leaders in corporate America, chief scientists in federal labs, and as entrepreneurs who have created start-ups,” said S. Narayanan, Ph.D. and current dean of the College of Engineering and Computer Science.

While in the program, the collective research accomplishments of the first 100 graduates have been extraordinary. They have tackled a multitude of hi-tech research projects, including the completion of 100 dissertations with both military and civilian applications. 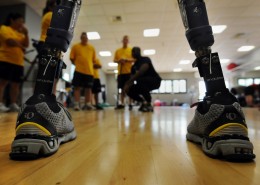 Prosthetics are one of the many examples of biomedial engineering research being done in the program.

While the span of research has been rich and diverse, so has the student population. But at the same time, the program at Wright State has had great success attracting homegrown talent.

“Unlike most engineering doctoral programs in the United States, the Ph.D. in Engineering Program at Wright State has awarded more than 50 percent of its degrees to U.S. citizens,” said Grandhi. “Our partnerships with DAGSI (the Dayton Area Graduate Studies Institute) and AFRL have been instrumental in attracting these high-quality U.S. students.”

As successful as the research has been, the program has proven to be an equally successful stepping-stone for professionals in the military, private industry and academia.

“Compared to peer institutions, the rigors of the engineering programs at Wright State, together with the talent and dedication of the faculty and staff, prepare engineering graduates to excel in a wide variety of professional careers,” said Arif Malik, Ph.D., a 2007 graduate and assistant professor of mechanical engineering at Saint Louis University.

“The DAGSI program at Wright State University was invaluable to me by providing the resources needed to pursue the doctorate degree,” said Brian Joyce, Ph.D., founder and president of Metallurgical Solutions Inc. (MSI Lab) in Middletown.

“Guidance from the faculty in the Mechanical and Materials Engineering Department gave me a foundation of knowledge that enabled us to create the MSI Lab, a high-technology corporation providing forensics support to local, national and global industries.”

Jenna Serres, Ph.D., a staff engineer in the advanced survivability technology group at BAE Systems in Fairfield, Ohio and a graduate from fall 2008, agrees.

“As a recent graduate of WSU’s Ph.D. in Engineering Program, I feel the education I received not only prepared me to enter the technical workforce, but provided me with an extensive set of skills that have helped me excel in my current position,” said Serres. “Through comprehensive coursework and hands-on research, I gained valuable insight that I apply to everyday tasks.”

The interdisciplinary direction has been a boon to aerospace engineering research in particular. In 2010, the National Research Council rated Wright State’s Ph.D. in Engineering Program 16th of 31 doctoral programs in the discipline. Also a credit to the growth of the program, The Carnegie Foundation has rated WSU as a high-research activity university.

Fred Garber, a Ph.D. and associate professor of electrical engineering at Wright State may sum it up best.

“From a dream to advance the technological prowess of the region, the Ph.D. program has produced and placed professionals in industry, defense and academe who are leading research and development efforts that will help shape Ohio’s future,” said Garber.