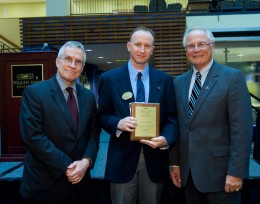 The man who takes students to Costa Rica twice a year was honored as part of this year’s International Education Week.

The award is designed to recognize the successful efforts of members of the Wright State community in expanding global awareness and international understanding on campus and in the surrounding communities. It highlights innovations in curriculum development, the operation of study abroad activities and the provision of services to students and scholars.

The Costa Rica program has been so successful that it has given rise to the development of other Ambassador Programs to a variety of countries and in a variety of disciplines. In 2006, it was honored with the President’s Award for Excellence: Outstanding Collaborative Unit.

As a result of his work developing Wright State’s study abroad programs, Rubin has served on the UCIE’s Education and Work Abroad Committee since its inception in 2000.

His contribution to the education of international students on campus has been just as extensive as his study abroad efforts.

As ESL director, Rubin mentors the teaching assistants who teach “pre-college” ESL writing courses. He has also advocated for the needs of international students, ensuring that they have sufficient access to ESL courses.

Rubin has organized and directed the International Teaching Assistant (ITA) workshops held each year to assist ITAs with their classroom English and presentation skills.

“He has truly helped develop global awareness on this campus,” said Carol Loranger, Ph.D., chair of the Department of English Language and Literatures. “I can think of no single faculty member more successful and dedicated in this regard.”

Rubin has won numerous awards including the College of Liberal Arts Award for Outstanding Teaching and the Learning Communities Award for Overall Experience. He served as faculty-in-residence for the University Honors Program from 2001 to 2005.