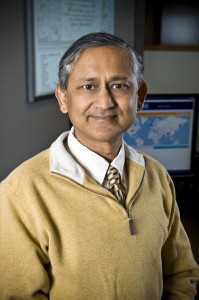 Online social networks and Internet-connected mobile devices such as smart phones have created an immense opportunity that empowers citizens and organizations to communicate and coordinate effectively in the wake of critical events, Amit Sheth says.

Just hours after a powerful earthquake killed hundreds of people in Turkey and left thousands homeless Oct. 23, thousands of others were offering shelter via Twitter and email.

The online outpouring of aid was reported by the British newspaper the Guardian. It’s just one example of how the use of social media is reshaping the way people respond to natural disasters and other large-scale emergencies. But a Wright State University professor believes we’ve just scratched the surface of its potential.

Amit Sheth, Ph.D., leads a collaborative team of Wright State and Ohio State University researchers who are developing new ways to extract meaningful information from hundreds of thousands of Twitter and other messages as they are posted during emergencies.

Their work is in a growing field sometimes called Web 3.0 or Semantic Web. The National Science Foundation is funding the research under a $750,000 Social Computational Systems (SoCS) program grant that includes $480,000 to Wright State and $270,000 to Ohio State. The research involves both computer scientists and social scientists.

Large-scale emergencies typically involve a wide variety of stakeholders, says Sheth, Wright State’s LexisNexis Eminent Scholar and director of Kno.e.sis, the Ohio Center of Excellence in Knowledge-enabled Computing. “You have affected parties that need help, you have government organizations, and you have non-government organizations, or NGOs. You have NGOs that specialize in medical support. Others do food and shelter, and so on,” he says.

All of these stakeholders need information, but solid information can be hard to get in the chaotic first hours or days of an emergency.

The solution requires extracting not just data but meaning from the Internet. Doing that has been a decade-long focus of Kno.e.sis, where Sheth, his colleagues and students have developed groundbreaking tools and methods. SoCS is the latest of several projects there. 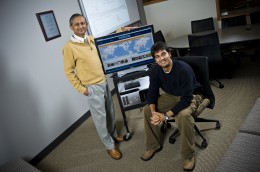 The SoCS project seeks to leverage Twitter posts or “tweets” as the primary source of information from citizens.

Online social networks and Internet-connected mobile devices such as smart phones have created an immense opportunity that empowers citizens and organizations to communicate and coordinate effectively in the wake of critical events, Sheth says.

For example, when earthquakes recently struck Haiti, Japan and China, and when flooding ravaged parts of Pakistan, people used Twitter and text messaging to report conditions and coordinate aid efforts. “In any emergency, any disaster, these days you see the use of social media,” Sheth says. “You see it in developed worlds and you see it in developing worlds.”

The SoCS project seeks to leverage Twitter posts or “tweets” as the primary source of information from citizens. The scientists will analyze the tweet content using semantic content analysis and other advanced techniques to squeeze out meaningful information that could be useful to citizens or aid organizations. Human role players will act on the results in small-scale simulations to test their effectiveness.

“How, for example, do you understand what needs there are? Where should we channel the needs? How would people who have some capacity to do public good—say some limited medical capacity to support a medical team—be best utilized? How can NGOs coordinate with government so that they could be more effective?” asks Sheth.

These are vital questions, but getting meaningful answers by sifting through thousands of tweets isn’t a simple task.

“In emergencies, people try to communicate rapidly. But it’s important to understand the meanings in messages,” says Hemant Purohit, Prof. Sheth’s Ph.D. advisee. Purohit is one of several graduate students working on the project. He says tweets typically are imprecise and often contain abbreviations, hyperlinks and other content that challenge automated analysis techniques.

Says Sheth, “We’ll be studying the ability to understand what people are asking for, ability to understand what people can offer, how to connect the people, what words they could use, and how we could lead them to better use social media.” Sheth believes this research can lead to valuable insights on effective use of social media during emergencies.

In the meantime, he says, the SoCS project offers cutting-edge research opportunities for students in a growing field that needs their skills. “We supply top talent locally and globally,” he says.

Sheth says the project is “very exciting” for himself and Kno.e.sis because of the interdisciplinary collaboration with John Flach, Ph.D., professor and chair of the Department of Psychology, and Valerie Shalin, Ph.D., associate professor of psychology, both at Wright State, and Srinivasan Parthasarathy, Ph.D., a professor in the departments of Computer Science and Engineering and Biomedical Informatics at Ohio State University.

Read more about SoCS and the Semantic Social Web at http://knoesis.wright.edu